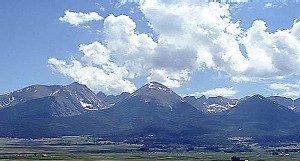 In the winter of 1880 three prospectors – E.J. Oliver, S.J. Harkman and H.A. Melton were prospecting two miles north of what would later become known as Dead Man Camp. As they were working, the sky threatened an oncoming blizzard and they quickly looked about for shelter.

Spying a small opening in a sheer rock wall across the canyon, they made their way through the opening, lighting several crude torches. Though the passageway was narrow and less than four feet high, it opened up into a large 20-foot long room. 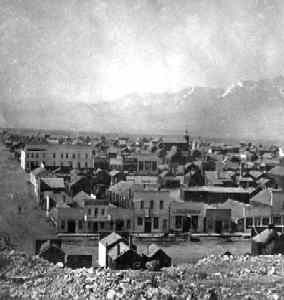 Shining their torches around, Oliver found the first of five skeletons scattered around the dusty, dark cavern. While exploring the cavern, they found several tight passageways extending into the gloom of the mountain. Choosing one, they followed the tunnel deeper into the mountain until it too opened up into a large vault-like chamber.  Shining their torches around, Melton noticed shelves on the western wall that had been carved into the stone.  Bringing his torch closer, he saw several odd-looking stones stacked on one of the shelves and picking one up, he was surprised at its heavy weight. When he and his partners scrutinized it more carefully, they were astounded to discover that the stone was actually a crude bar of gold!

After the threat of snow had passed, the three excited men gathered up five of the bars and headed over the pass to Silvercliff, in the Wet Mountain Valley. Immediately, they had the bars assayed, which proved to be worth $900 apiece. Becoming instant celebrities in Silver Cliff, the men were questioned by all whom they encountered about the source of the gold bars, but all three men steadfastly refused to divulge the location, making plans to return to Dead Man’s Cave in the spring.

In the early spring, they made their way back to Dead Man Cave. They thought the cave would be easy to find again but when they returned, there were many places that looked like the area in which the cave had been found. Over the years, they frequently returned to the area but they never again found the cave.

The story of these three prospectors was reported in both The Fairplay Flume and The Denver Post in 1880. To this day, the gold has never been found.