The Dalton Period of indigenous people extends from 10,500-9,900 years ago from about 8500-7900 BC. During this time, there existed a culture of ancient Native American hunter-gatherers who made a distinctive set of stone tools that are today found at sites across the middle United States.

The Dalton Period occurred during the transition from the last ice age to the beginning of the Holocene age. The Dalton people probably knew a wide range of plant species that were edible or could be used as medicines. Some of the important native plants include persimmon, greenbrier, pokeweed, cattail, amaranth, dock, lamb’s quarters, wild onion, and berries, fruits, and nuts. The people also hunted elk, bear, white-tailed deer, raccoons, rabbits, squirrels, and other small mammals. Although direct evidence is lacking, birds, waterfowl, amphibians, reptiles, and fish would likely have been excellent sources of protein and relatively easy to capture, especially in the Mississippi River Valley Delta region. 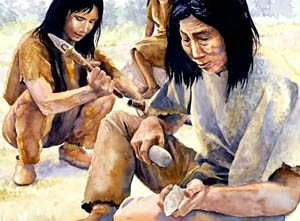 The Dalton people continued using most of the stone tool types that their Paleoindian ancestors used: spear points, which also served as cutting tools, as well as flake tools (end scrapers, side scrapers, and gravers) usually made from flint and shaped by flaking pieces off a larger core. Several tools that first appeared during the Dalton period include the chipped stone drill/awl and adze, the shaft abrader, and edge-abraded cobbles.

The most distinctive item in the Dalton stone toolkit, the Dalton point, was used to penetrate game like white-tailed deer and to cut and saw meat, hide, wood, and other materials. Dalton points were generally lanceolate (leaf-shaped). The blade portion of the point was sometimes serrated, similar to a modern bread knife. The bottom or haft portion of the Dalton point was made to be concave at the base and tapered so that it would fit into a handle or a spear shaft. As Dalton points were re-sharpened, they began to exhibit an obvious bevel on opposing faces of the blade. This ingenious re-sharpening technique extended the life of the Dalton spear/knife. Archaeologists have documented the specific steps taken in manufacturing and maintaining Dalton spear points and recycling Dalton points into other tools, such as burins, end scrapers, and perforators/drills.

Although the remains of the Dalton period are minimal, it is possible to draw some general conclusions about the culture. Dalton people were the descendants of the Paleoindians based on similarities in technology, settlement, and subsistence strategies. However, some of the animals hunted by the Paleoindians – such as the late ice age mammoths and mastodons – were extinct by the time the Dalton culture came into existence. The invention of the chipped stone adze, apparently by a Dalton person, was the first heavy-duty woodworking tool for felling trees and working wood in North America. The Dalton adze laid the foundation for later groups to alter their environment significantly. Based on the distances between stone sources and campsites where stone tools are deposited, Dalton people generally traveled shorter distances than their Paleoindian ancestors and greater distances than their descendants. Although much of their time was spent in their daily tasks of procuring materials for subsistence needs, they devoted time to matters other than food, clothing, and shelter. The planned interment of bodies and goods at the Sloan site suggests that Dalton people believed in an afterlife and possibly a higher power. If such a belief system was in place by 8500 BC, it likely dates to an even earlier age.