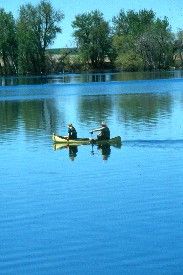 Very recently we lived in a house in Northern Colorado by Barr Lake, about twenty miles northeast of Denver. The homes there are very old and everyone has at least one story of something strange happening in or around their home. We all shared stories of how things would mysteriously get moved and how we sometimes sensed a presence in our homes. These are all things that I had learned to ignore over the years, that was, until this morning. Though we have already moved, I have been going back to the house on Barr Lake to do some cleaning before everything is final.

This morning, I was there alone. At first, all I heard was the usual strange noises that the house has always made, but my cat was acting really odd. She was standing at top of the stairs, looking down into the basement with her hair standing on end. I kept telling myself that she was just acting frisky, I guess in hopes that I would feel better.

In the front hall, there is a small bathroom where I began to mop the floor. As I was leaning into the bathroom from the hallway, something or someone hit me – hard, on the back. It felt as though a fist had slammed into my back! When I spun around, nothing was there.

I looked all about the area to see if something had fallen on me, but there was nothing. There couldn’t have been anything to fall, as everything had already been moved. In the meantime, my cat was at the end of the hallway, hair standing on end, and hissing. Then she took off running. Needless for me to say, I immediately left the house.  I have many stories to tell of that old place, but never had I been physically touched by them.

I personally feel there are three spirits in the house including an older man, a woman in her 20’s, and a young girl, that people have actually seen. For whatever reason, I feel that it was the old man who hit me today. My back is still red and very warm where I felt the fist, but is there is no bruise. I am not sure why “they” would hit me. But, I wanted to tell that story.

More than a century and a half ago the Barr Lake area was a natural depression in the prairie that collected and held spring water. Buffalo, elk and wolves congregated around the spring as pronghorn antelope roamed the adjacent prairie grass. Native Americans, including the Arapaho, Cheyenne, and Ute, following the game often hunted the area.

By the 1860s cowboys began to move cattle through the Barr Lake area, taking advantage of the rich grasses and water from the Wallow. It soon became an important rest stop along the Goodnight-Loving Trail from Texas to Wyoming.

The greatest influence on the area was when the railroad was established in 1883, linking Denver to Chicago and passing right by the Barr Lake area. Suddenly, numerous pioneers began to settle the area.

In 1886 construction began on the Burlington Canal diverting water from the South Platte River into the wallow to create Oasis Reservoir. The Oasis Dam was built in 1908 creating what is now known as Barr Lake.

Directions:  From Denver, take I-76 northeast, exit on Bromley Lane and go east to Piccadilly Road. Then south to the park entrance.