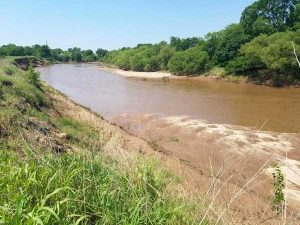 The Chikaskia River, usually pronounced chi-KAS-kee-uh, but often pronounced chi-KAS-kee, is a tributary of the Arkansas River system. It is formed by the union of Sand Creek and another small stream in the southern part of Kingman County, Kansas. Its general course is southeast, across the southeast corner of Harper County and through Sumner County, crossing the southern boundary of the state near the town of Hunnewell, and finally emptying into the Salt Fork of the Arkansas River near the town of Tonkawa, Oklahoma. It is about 145 miles long and is known for its large catfish.