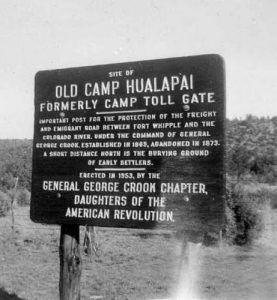 Camp Hualapai, Arizona was a U.S. Army camp established in May 1869, at the close of the Hualapai War, just southeast of Aztec Pass.

Built by Major William R. Price and his men of the 8th U.S. Cavalry, it was first named Camp Devin but quickly renamed Camp Toll Gate because it was established along the Hardyville-Prescott Toll Road. Its purpose was to protect the road from Indian attacks. It was renamed once again to Camp Hualpai on August 1, 1870. A small settlement that grew up around the camp became known as Juniper. The camp was abandoned on July 31, 1873, and later transferred to the Department of Interior.

Today there are just a very few remnants and a small cemetery, but both are located on private property. The site is located on Walnut Creek Road north of Prescott, Arizona.