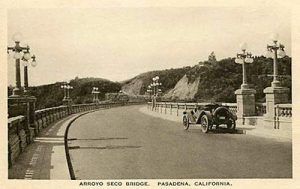 The majestic 1913 Colorado Street Bridge in Pasadena, California, not only wowed early travelers crossing the causeway but soon took on a more sinister note when people began to leap from the 150-foot bridge to their death. Within a decade of its construction, locals had begun to call it the “Suicide Bridge.” As you can imagine, legends began to abound that those unfortunate souls haunted the bridge.

The beautiful concrete bridge spans 1,467 feet across the Arroyo Seco, a deeply cut canyon linking the San Gabriel Mountains to the Los Angeles River and containing the intermittent Arroyo Seco Stream for which it is named. The bridge is often incorrectly called the “Arroyo Seco Bridge.”

In Pasadena’s early days, before the historic Colorado Street Bridge was built, crossing the Arroyo Seco was a challenging task. Horses and wagons descended the steep eastern slope, crossed the stream over a smaller bridge, and climbed up the west bank through Eagle Rock Pass.

The bridge was designed and built by the J.A.L. Waddell firm of Kansas City, Missouri, and named for Colorado Street (now called Colorado Boulevard,) which was the major east-west thoroughfare through Pasadena. Known for its Beaux-Arts arches, ornate lamp posts, and railings, the initial design proved difficult due to finding solid footing in the Arroyo bed. However, when engineer John Drake Mercereau conceived the idea of curving the bridge, he created a work of art. 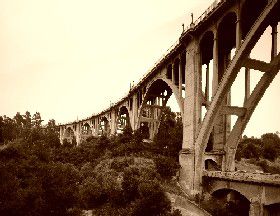 The first tragedy on the bridge occurred before construction was even complete. Allegedly, when one of the bridge workers toppled over the side and plunged headfirst into a vat of wet concrete, his co-workers assumed he could not be saved in time and left his body in the quick-drying cement. He is only one of the many souls said to haunt the “Suicide Bridge.”

The first suicide occurred on November 16, 1919, followed by several others, especially during the Great Depression. Over the years, it is estimated that more than 100 people took their lives leaping 150 feet into the arroyo below. One of the more notable suicides was when a despondent mother threw her baby girl over the railing on May 1, 1937. She then followed her into the depths of the canyon. Though the mother died, her child miraculously survived. Her mother had inadvertently tossed her into nearby trees, and she was later recovered from the thick branches.

By the 1980s, the historic bridge had fallen into significant disrepair as chunks of concrete began to fall from its ornate railings and arches. After the Loma Prieta earthquake near Oakland in 1989, the bridge was closed as a precautionary measure. Eventually, federal, state, and local funds provided some $27 million in renovation costs, and the bridge was reopened in 1993, complete with its original detail, plus a suicide prevention rail. Though the number of suicides has decreased throughout the years, the bridge continues to retain its nickname and ghostly legends.

According to the tales, several spirits are said to wander the bridge and the arroyo below. Others have heard unexplained cries coming from the canyon. One report tells of a spectral man often seen wandering the bridge wearing wire-rimmed glasses. Other people have claimed to see a woman in a long flowing robe who stands atop one of the parapets before vanishing as she throws herself off the side.

In the arroyo below, phantom forms have been seen walking the river bed, several unexplainable sounds are often heard, and the atmosphere is often described as “thick.”

The Colorado Street Bridge was part of Route 66 until 1940, when the Arroyo Seco Parkway opened. Today, the bridge has received a Civil Engineering Landmark designation and is listed on the National Register of Historic Places. 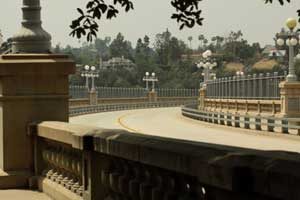 The Mother Road Icon was the center of tragic news again in late October of 2015 when noted Actor, Model, and Musician Sam Sarpong took his own life by jumping off the bridge.