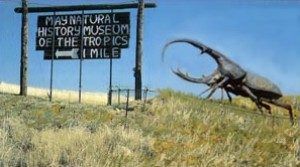 The May Natural History Museum, south of Colorado Springs, Colorado, is a strange location for one of the largest collections of tropical bugs. Known as the “Bug Museum” to locals, the museum provides over 8,000 species of beautiful butterflies, moths, bizarre beetles, giant spiders, deadly scorpions, and more! For over 80 years, May Museum Founder, James May, traveled the world finding over 100,000 fascinating specimens of bugs,

In 1929, John M. May and his father began exhibiting a tropical display of insects at national exhibitions, flower and sports shows in many large American cities. Then, in the 1940s, John May built a permanent museum and headquarters building on his ranch nine miles southwest of Colorado Springs. Though the collection contains over 100,000 bugs, only the largest, most beautiful, and the most valuable are on display, with the exhibits changing from year to year.

Imagine a stick insect from New Guinea, which measures 17 inches long and looks so much like a bundle of sticks that it is invisible unless it moves, a nine-inch scorpion of the African Congo, the world’s largest purple Tarantulas that catch and kill mice and small birds, and the ten-inch wide Actius Moths of India that imitate the Cobra Snake to scare off their enemies.

There are Colombian Beetles so large that they can break street lights and knock a man down if they hit him while flying, moths that rob beehives, and creatures that build log houses around themselves.

James F. W. May was born in England in 1884, but his family lived in Brazil, South America, where he was raised. Mr. May’s father was an adventurous man and for some years collected for the British Museum on the Upper Amazon River, which, in those days, was virtually unexplored. He died of Yellow Fever, which he contracted on one of his expeditions when James was only eight years old; however, it must have been his father’s influence that stimulated James to do his work in this field of Natural History. James’ brother, Ted May, was the curator of the Government Museum in Rio de Janeiro for many years and independently built up one of the largest collections of Brazilian Arthropods.

The May Natural Museum is open from May 1st to October 1st, and reservations are required for groups in the winter. Groups of ten are the minimum number of persons possible for winter reservations. The Museum is approximately nine miles southwest of Colorado Springs and one mile west of Highway 115.

A replica of the Hercules Beetle of the West Indies marks the turnoff to the Museum.