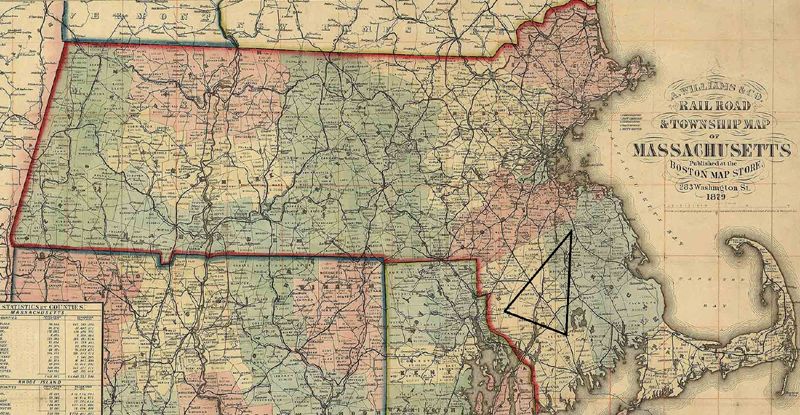 Located in southeastern Massachusetts is the Bridgewater Triangle, an area of about 200 square miles that has been the site of legends and curses for centuries and has been called home to strange phenomena, including ghosts, Bigfoot UFOs, and strange creatures.

Roughly bounded by the towns of Rehoboth, Freetown, and Abington, the area includes the Hockomock Swamp Wildlife Management Area and the Freetown-Fall River State Forest. 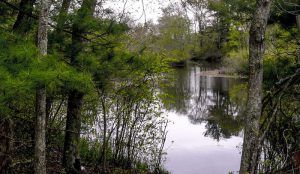 At the center of the region is Hockomock Swamp that the Wampanoag Indian Tribe long used before European colonists arrived. Before them, other indigenous people are known to have lived in the area, as human artifacts have been discovered that date to 9,000 years old.

From about 300 AD to Colonial times, Native Americans depended on the swamp as an abundant source of game. These people revered the swamp for its bounty and used some areas for sacred burial grounds. The Wampanoag both worshiped and feared the area, as the chief deity of death and disease, called Hobomock, was said to dwell in the swamp. Among many Algonquian tribes, Hobomock was often destructive, evil, and usually in opposition to Kautantowit, the great creator god. 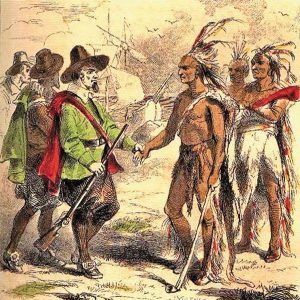 In the 17th century, the swamp was used as a fortress by the Wampanoag Indians against invasion by early English settlers. During King Philip’s War, it became a strategic base of operations for Chief Metacomet to launch assaults upon nearby English settlements.

During the 18th and 19th centuries, Euro-American settlers deemed the swamp to be worthless and attempted to drain portions of the swamp for use as farmland.

Also within the triangle is the Freetown-Fall River State Forest, a large swath of forested land located at Freetown and Fall River, Massachusetts. Covering about 5,441 acres, this area was also the site of conflict between colonial settlers and the area Indians. Beginning in 1659, the land was purchased from the Wampanoag Indians, and the town of Freetown was later established in 1683. 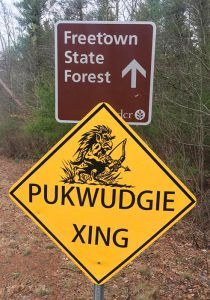 Early on, the forest was said to have been home to a race of diminutive humanoid creatures known as Pukwudgies. Long known in Delaware and Wampanoag Indian folklore, these troll-like creatures, generally described as about 3-4 feet tall with smooth, hairy grey skin and large ears, have a notorious reputation for mischief and mayhem. They were once said to have been friendly to humans but later turned against them. These evil little beings have been blamed for people who have fallen from cliffs, disappeared, or mysteriously died.

In the forest, some places are seemingly possessed of some type of dark power. One of the most famous places is an 80-foot deep rock quarry known as the Assonet Ledge. More simply known as “The Ledge,” this is a scar left on the landscape by the Fall River Granite Company during the 1800s. Here, people often speak of having a compelling urge to jump off the cliff. Some reports say that some people have, in fact, jumped to their deaths. Other people talk of feeling a sense of dread when venturing near the ledge. It is said that visitors have seen ghosts here, that it has been an alleged hotspot for Satanists and strange cults, and some have seen UFOs. 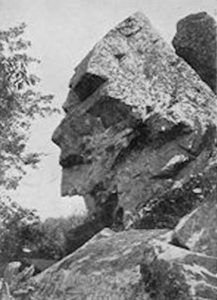 A similar site called Profile Rock also has a paranormal reputation. Located in Freetown, the 50-foot high rock looks like a human face, and the Wampanoag people have long considered the rock as sacred. According to Indian legend, the image is of Wampanoag Chief Massasoit, whose son died at this very place. Local legends say that Native American ghost dancers are often spied in warrior dress dancing around the rock and that the ghost of a man has been seen sitting on the rock with outstretched arms. Other reports tell of strange glowing orbs of light being seen, and disembodied voices heard.

Also located in the forest is the immense, 40-ton boulder known as Dighton Rock, one of the greatest mysteries of Massachusetts. The slanted, six-sided boulder is approximately five feet high, nine and a half feet wide, and eleven feet long. For more than 300 years, people have wondered about the lines, geometric shapes, drawings, and writing that appear on the rock and who created them. Several speculations have been made as to who made these markings on the rock, including Native Americans, Vikings, and even Phoenicians, an ancient Mediterranean civilization, but their identity has never been determined.

The forest has been known as the site of various cult activities, which is said to have included animal sacrifice and ritualistic murders committed by admitted Satanists. Near Freetown and Fall River, mutilated animals were found in the 1990s that were believed to have been the work of one of these cults.

The density of forest has also been used by other killers, leaving behind the remains of their victims. 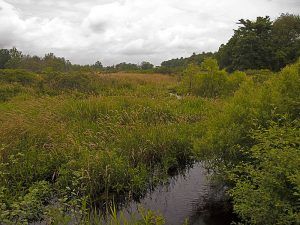 More strange history has occurred over the years in the remote brush and impenetrable trees and vines of the Hockomock Swamp. In addition to natural dangers such as quicksand, thorns, and sinkholes, visitors have seen ghosts, UFOs, and strange beasts throughout the years.

There have been many reports of a shaggy, ape-like creature seen within the swamp. This creature, probably a Bigfoot, has been described as having a terrible stench. After one of these sightings, Bridgewater residents organized expeditions to search for the Bigfoot-like creature, but they found not a trace of the beast.

There are others who have seen other mysterious creatures in the swamp. Some, including a law enforcement officer, have reported seeing giant, black pterodactyl-like creatures with 8-12 feet wingspans. Some say this large creature is the mythical Thunderbird, prominent in local Native American mythology. Others have reported seeing vicious red-eyed dogs and giant snakes.

Throughout the Bridgewater Triangle, numerous paranormal reports have been made. Mysterious glowing eyes of unseen creatures are seen in the darkness, and glowing lights hover above the trees; native American ghosts are seen paddling canoes in the waterways. The ghost of a redhaired hitchhiker is seen along a stretch of Route 44 in Rehoboth, and another ghostly phantom appears in Hockomock Swamp near Route 138. 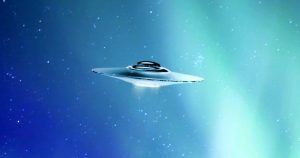 The area is also a hotbed of UFO sightings. The first sighting occurred in 1760, and numerous others followed. In 1908, a UFO sighting near Bridgewater was documented in local newspapers. In 1968, five people claimed that they saw a strange ball of light floating among the trees in a wooded part of Rehoboth. In 1976, two UFOs were seen landing along Route 44 near Taunton. In 1994, a Bridgewater Law Enforcement Officer reported seeing a triangular-shaped craft with red and white lights. In the summer of 1999, a fast-moving UFO accompanied by a loud noise was reported near Lake Nippenicket.

There is no explanation for why this area has been affected by strange phenomena for so many years.

Some say that the area has been cursed by Native American spirits because the land was taken from the Wampanoag people. Others believe that the area emanates negative and disruptive energy because of the brutal conflict between early settlers and the native people of the region during King Philip’s War, the bloodiest war per capita in American history. By the end of the war, nearly 3,000 Wampanoag men, women, and children were killed or sold onto slave ships bound for the West Indies. Some say it is haunted by these many people who lost their lives and their lands. Yet others believe that the area is a vortex or window where the laws of gravity seem not to operate in the way as understood in the natural world. 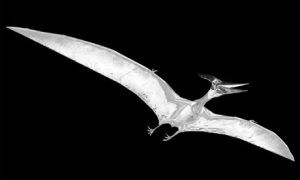