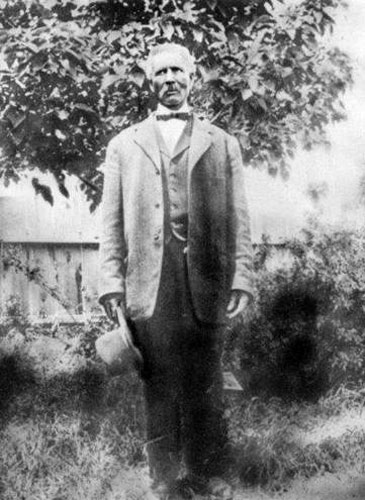 Bose Ikard was a former slave who participated in the pioneering cattle drives and honed his cowboy skills with Charles Goodnight.

Bose Ikard was born into slavery in July 1843 in Noxubee County, Mississippi. Later, he lived in Union Parish, Louisiana, before his master, Dr. Milton Ikard, his wife, and five children moved to Lamar County, Texas, in 1852. Soon, the family moved again to Parker County. There, Bose grew to adulthood, learning to farm, ranch, and fight Indians as the Civil War drew near. After slaves were freed, Ikard stayed with his former master for a time.

In 1866, he went to work for Oliver Loving as a trail driver, participating in pioneering cattle drives on what became known as the Goodnight-Loving Trail.

The Goodnight-Loving Trail, from Texas through New Mexico to Colorado and further north, was a risky move that paid off for the cowboys. Much of the path was through a desert area where water was scarce for several days. However, they took the risk, which paid handsomely when the cattle were herded and sold. 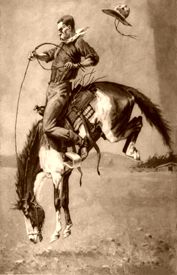 When he first went to work on the trail, there was a bronc they were trying to break. After several other cowboys tried and had been thrown, Ikerd said he could break it. He got the horse to stop bucking by biting it on its neck, establishing himself as a top cowboy.

During these cattle drives, Ikard served as a tracker, cowboy, and as Charles Goodnight’s de facto banker, often carrying thousands of dollars in cash until the money could be deposited.

In the summer of 1867, when Oliver Loving went ahead of the herd to negotiate contracts, taking only one trusted scout with him, he was attacked by Comanche and seriously wounded. Though he reached Fort Sumner, New Mexico, he later died of his wounds on September 25, 1867. Goodnight continued the drive to Colorado but later returned for Loving’s body and returned it to Texas, where he was buried in the Greenwood Cemetery in Weatherford.

In 1869 Ikard wanted to settle in Colorado, but Goodnight persuaded him to buy a farm in Parker County, Texas, because there were so few Blacks in Colorado. That year, he participated in a running battle with Quanah Parker’s Comanche band, riding alongside his former master, Milton Ikard. Bose settled in Weatherford, became a farmer, and married a woman named Angelina, with whom he would have 15 children. 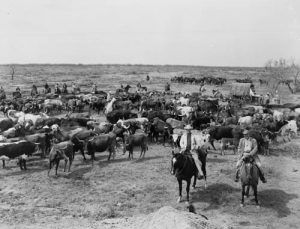 Bose Ikard continued to work with Loving’s partner, Charles Goodnight, for four years on the Goodnight-Loving Trail. Goodnight visited him in Weatherford whenever the opportunity arose and gave him gifts of money.

The two men became lifelong friends. Goodnight later commented that he trusted Bose Ikard “farther than any living man. He was my detective, banker, and everything else in Colorado, New Mexico, and the other wild country I was in.”

While with his sister in Austin, Texas, Ikard died on January 4, 1929. He was 85 years old. His body was transported by train to Weatherford and buried in the Greenwood Cemetery.

Charles Goodnight paid for and erected a marker with this epitaph: 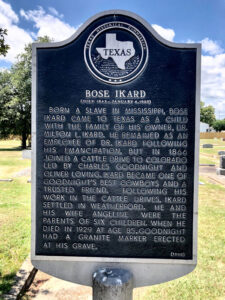 “Bose Ikard served with me four years on the Goodnight-Loving Trail, never shirked a duty or disobeyed an order, rode with me in many stampedes, participated in three engagements with Comanches, splendid behavior.”