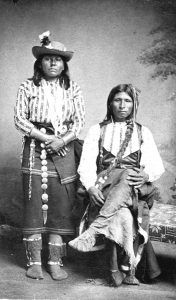 In mid-October, 1837, a Texas Ranger Company pursued a band of raiding Kichai Indians up the Colorado River. Lieutenant A. B. Van Benthusen and 17 men then split from the main group and headed north to the Brazos River where they came upon the Kichai on November 10th. The Kichai, numbering more than 150 warriors, had stopped fleeing and took the offensive. The Rangers sought cover in a shallow ravine where they fought for two hours, often at close quarters. The Kichai lost their leader in their first attack but retired to elect a new one and soon took up the battle again.

The Indians then set fire to the prairie and smoked the Rangers out. The Rangers charged through the smoke, eight of them escaping into the nearby woods. Four had died before the fire and another six were killed while fleeing. The eight survivors, having lost their horses and equipment, made their way to a settlement on the Sabine River on November 27th. The battle is named “Stoned Houses” because the location where it took place had three stone mounds that looked like houses of the Indians. The battle site is located about ten miles south of Windthorst, Texas. It is commemorated with a historical marker.