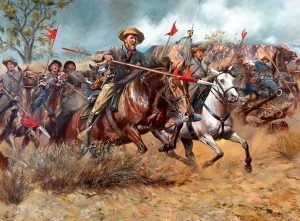 On April 30, 1859 Van Dorn led six companies of the Second Cavalry out of a temporary camp in Oklahoma on a march to the north, crossing the Cimarron River as they entered into Kansas. On their fourth day in the field, one of the scouts captured a Comanche boy, who was forced to lead the cavalry to his village.

The troops soon spotted a small band of Indian buffalo hunters. When a running fight ensued, one Comanche warrior was killed. As the troops continued on, they began to see a number of abandoned Indian campsites. Van Dorn and his troops then found and followed a fresh Indian trail. 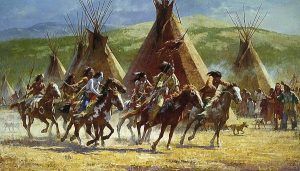 On May 13th, during a noontime halt, three Indians were discovered as they crept up on the Second Cavalry horse herd. While giving chase to the Indians, Lieutenant William B. Loyall discovered and captured a large herd of horses not far from a Comanche village on Crooked Creek. This spot, located about 18 miles south of the Santa Fe Trail’s Middle Crossing of the Arkansas River had long been a favored campground for the Kiowa and Comanche Indians.

When Van Dorn was notified that the village had been found, he immediately ordered his troops back into their saddles and attacked the camp. Van Dorn positioned two mounted troops on each side of the river, dismounted two more, and formed a line that swept down through the river valley. Deprived of their horses, the defiant Comanche took up positions among the bushes and trees of Crooked Creek and poured a barrage of arrows and gunfire at the approaching soldiers. But, the Indians were no match for the six companies of cavalry. When the fight was over 49 Indians, including eight women, were dead. Only five men survived, too badly wounded to fight to the death. Thirty-two women were captured. One trooper was lost, Lieutenant Lee suffered an arrow driven through his chest, and Captain Smith received a bullet wound in the thigh. Both would recover, to later take up arms for the Confederacy.

Van Dorn departed Crooked Creek the same day, dividing his command and leaving two companies near the battle site until the wounded recovered sufficiently to make the journey.

By May 31st, all the troops had returned to the temporary camp in Oklahoma.

Chalfant, William Y.; Without Quarter: The Wichita Expedition and the Fight on Crooked Creek; University of Oklahoma Press, 1991