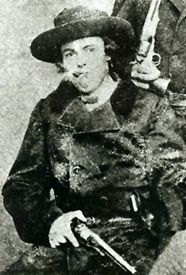 Archibald J. “Little Archie” Clement was born in Moniteau County, Missouri on January 1, 1846, Archie joined the Confederate guerillas under Captain William “Bloody Bill” Anderson in 1861 and by the time he was 17, had already become a lieutenant. A very small man, weighing just about 130 pounds and standing just over five feet tall, he made up with it with his fearlessness and as an expert pistol shot. He quickly took a prominent role in Anderson’s military operations, including the raid on Lawrence, Kansas where some 150 men were killed and the town was burned. He also participated in the Centralia, Missouri massacre where 23 Union soldiers were robbed and shot. When “Bloody Bill” Anderson was killed by Union forces on October 26, 1864, Clement took command of the unit until the war was over.

Though the Civil War was officially over, an embittered Clements continued to create problems for the government by intimidating voters in elections and becoming part of a gang that would later be referred to as the James-Younger Gang. Thought to have been the initial leader, he led them in their first robbery on February 13, 1866. The first daylight armed bank robbery in the U.S., the men stormed the County Savings Association in Liberty, Missouri taking over $60,000 in cash and bonds. As the outlaws were making their escape, gunfire erupted and an innocent 17-year-old boy was killed. Missouri authorities suspected Clements as the leader and a price was quickly put on his head.  However, the fearless little man next led the gang in robbing the Alexander Mitchell and Company Bank in Lexington, Missouri on October 30, 1866, making off about $2,000. He was finally killed by the Missouri State Militia on December 13, 1866, in Lexington, Missouri. He was buried in the Arnold Cemetery in Wellington, Missouri.