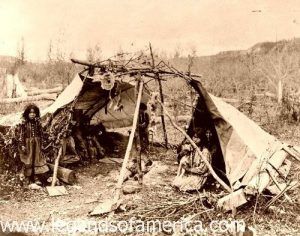 Like the ancient Greeks, the Siwash of the Northwest invests the unseen world with spiritual intelligence. Every tree has a soul; the forests were peopled with good and evil genie, the latter receiving oblation at the devil-dances, for it was not worthwhile to appease those already good; and the mountains are the home of tamanouses or guardian spirits, that sometimes fight together–as, when the spirits of Mount Tacoma engaged with those of Mount Hood, fire and melted stone burst from their peaks, their bellowing was heard afar. Some of the rocks flung by Tacoma fell short, blocking the Columbia about the Dalles.

Across these fantastic reports of an older time, there come echoes of a later instruction, adapted and blended into native legend so that the point of division cannot be indicated. Such is that of the mysterious Voyager of the Whulge — the Siwash name for the sound that takes the name of Puget from one of Vancouver’s officers.

Across this body of water, the stranger came in a copper canoe that borrowed the glories of the morning. When he had landed and sent for all the red men, far and near, he addressed to them a doctrine that provoked expressions of contempt–a doctrine of love.

Fight and steal no more, give of their goods to men in need, and forgive their enemies–they could not understand such things. He promised this radiant stranger to those who lived right, eternal life on seas and hills fairer than those of earth, but they did not heed him. At last, wearying of his talk, they dragged him to a tree and nailed him fast to it, with pegs through his hands and feet, and jeered and danced about him, as they did about their victims in the devil-dance until his head fell on his breast and his life went out.

A great storm, with thunderings and earthquakes! They took the body down and would have buried it, but it arose to its feet, as the sun burst forth, and resumed its preaching. Then they took the voyager’s word for truth and never harmed him more, while they grew less warlike as each year went by until, of all Indians, they were most peaceable.