“It was night before we came to their trail, and to our surprise, they were heading inland, to the north. They must have had a contract to supply the Mexican army with cavalry horses. They were simply sweeping the country, taking nothing but gentle stock. These they bucked in strings and led. That made easy trailing, as each string left a distinct trail. The moon was splendid that night, and we trailed as easily as though it had been day. We didn’t halt all night long on either trail, pegging along at a steady gait that would carry us inland some distance before morning. Our scouts aroused every ranch within miles that we passed on the way, only to have reports exaggerated as usual. One thing we did learn that night and that was that the robbers were led by a white man. He was described in the superlatives that the Spanish language possesses abundantly; everything from the horse he rode to the solid braid on his sombrero was described in the same strain. But that kind of prize was the kind we were looking for.

“On the head of the Arroyo Colorado there is a broken country interspersed with glades and large openings. We felt very sure that the robbers would make camp somewhere in that country. When day broke the freshness of the trail surprised and pleased us. They couldn’t be far away. Before an hour passed, we noticed a smoke cloud hanging low in the morning air about a mile ahead. We dismounted and securely tied our horses and pack stock.

Every man took all the cartridges he could use and was itching for the chance to use them. We left the trail, and to conceal ourselves took to the brush or dry arroyos as a protection against alarming the quarry. They were a quarter of a mile off when we first sighted them. We began to think the reports were right, for there seemed no end of horses and at least twenty-five men. By dropping back we could gain one of those dry arroyos which would bring us within one hundred yards of their camp. A young fellow by the name of Rusou, a crack shot, was acting captain in the absence of our officers. As we backed into the arroyo he said to us, ‘If there’s a white man there, and leave him to me.’ We were all satisfied that he would be cared for properly at Rusou’s hands, and silence gave consent.

“Opposite the camp we wormed out of the arroyo like a skirmish line, hugging the ground for the one remaining little knoll between the robbers and ourselves. I was within a few feet of Rusou as we sighted the camp about seventy-five yards distant. We were trying to make out a man that was asleep, at least he had his hat over his face, lying on a blanket with his head in a saddle. We concluded he was a white man if there was one. Our survey of their camp was cut short by two shots fired at us by two pickets of theirs posted to our left about one hundred yards. No one was hit, but the sleeping man jumped to his feet with a six-shooter in each hand. I heard Rusou say to himself, ‘You’re too late, my friend.’ His carbine spoke, and the fellow fell forward, firing both guns into the ground at his feet as he went down.

“Then the stuff was off and she opened up in earnest. They fought all right. I was on my knee pumping lead for dear life, and as I threw my carbine down to refill the magazine, a bullet struck it in the heel of the magazine with sufficient force to knock me backward. I thought I was hit for an instant, but it passed away in a moment. When I tried to work the lever I saw that my carbine was ruined. I called to the boys to notice a fellow with black whiskers who was shooting from behind his horse. He would shoot over and under alternately. I thought he was shooting at me. I threw down my carbine and drew my six-shooter. Just then I got a plug in the shoulder, and things got dizzy and dark. It caught me an inch above the nipple, ranging upward, — shooting from under, you see. But some of the boys must have noticed him, for he decorated the scene badly leaded, when it was over. I was unconscious for a few minutes, and when I came around the fight had ended.

“During the few brief moments that I was knocked out, our boys had closed in on them and mixed it with them at short range. The thieves took to such horses as they could lay their hands on, and one fellow went no farther. A six-shooter halted him at fifty yards. The boys rounded up over a hundred horses, each one with a fiber grass halter on, besides killing over twenty wounded ones to put them out of their misery. 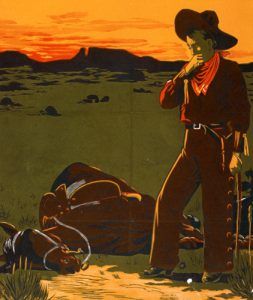 “It was a nasty fight. Two of our own boys were killed and three were wounded. But then you ought to have seen the other fellows; we took no prisoners that day. Nine men lay dead. Horses were dead and dying all around, and the wounded ones were crying in agony.

“This white man proved to be a typical dandy, a queer leader for such a gang. He was dressed in buckskin throughout, while his sombrero was as fine as money could buy.

You can know it was a fine one, for it was sold for company prize money, and brought three hundred and fifty dollars. He had nearly four thousand dollars on his person and in his saddle. A belt which we found on him had eleven hundred in bills and six hundred in good old yellow gold. The silver in the saddle was mixed, Mexican and American about equally.

“He had as fine a gold watch in his pocket as you ever saw, while his firearms and saddle were beauties. He was a dandy all right, and a fine-looking man, over six feet tall, with swarthy complexion and hair like a raven’s wing. He was too nice a man for the company he was in. We looked the ‘Black Book’ over afterward for any description of him. At that time there were over four thousand criminals and outlaws described in it, but there was no description that would fit him. For this reason, we supposed that he must live far in the interior of Mexico.

“Our saddle stock was brought up, and our wounded were bandaged as best they could be. My wound was the worst, so they concluded to send me back. One of the boys went with me, and we made a fifty-mile ride before we got medical attention. While I was in the hospital I got my divvy of the prize money, something over four hundred dollars.”

When Ramrod had finished his narrative, he was compelled to submit to a cross-examination at the hands of Cushion-foot, for he delighted in a skirmish. All his questions being satisfactorily answered, Cushion-foot drew up his saddle alongside of where Ramrod lay stretched on a blanket and seated himself. This was a signal to the rest of us that he had a story, so we drew near, for he spoke so low that you must be near to hear him. His years on the frontier were rich in experience, though he seldom referred to them.