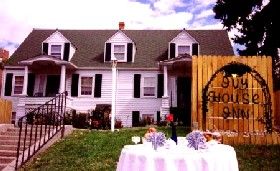 Casper, Wyoming is home to the Ivy House Inn, a beautiful Cape Cod-style inn that also apparently houses not only the ghost of its prior owner but also her two Siamese cats, as well.

While no longer an Inn, it was built where the prairie meets the Rocky Mountains in 1916 by Mr. and Mrs. White. The roomy three-story home was finally complete when two grand front porches were added in 1940.

Said to have been controlling in life, Mrs. White apparently continues her manipulating behavior in the afterlife by ensuring that guests do not drink or smoke in her place.  However, Mrs. White doesn’t appear to limit her activities to only undesirable activities; she shows up according to the historic inn’s owners and guests.

At the age of 93, Mrs. White passed away in 1995, and Tom and Kathy Johnson purchased the house in 1996. Tom Johnson didn’t believe in ghosts when he bought the property, but that all changed as he began the work of renovating the home into a bed and breakfast inn.

Evidently, Mrs. White was not entirely happy with the renovations, as suddenly, when Johnson was using a power drill, it stopped working. As he turned around, the plug was hanging in mid-air for several seconds before it fell to the floor. On another occasion, a hammer simply got up and walked out of the room.

To say the least, Tom Johnson is a believer today, so much so that he has since become a paranormal investigator. He also believes that the inn not only houses Mrs. White but also several other spirits, including two Siamese cats. These two spectral felines have often been seen running throughout the building, and one guest reported that a cat slept on the end of the bed, purring contentedly.

Another apparition is that of a man that is often seen in the back parking area, where car alarms are set off regularly. Perhaps, this is Mr. White? Finally, another guest reported seeing a male figure standing above her bed and heard a mail voicing saying, “Isn’t it funny how people get lost?”

Others, who have stayed in one of the downstairs rooms, have often reported having the same dream of a young man wandering back and forth from the sink to the closet.

With all the odd happenings at this former historic inn, it is still the controlling Mrs. White whose presence is most often shown. One regular occurrence is when smells of the past suddenly fill a room, such as old menthol cold medications, the aroma of baking chocolate, and the odor of a scouring pad on a skillet. Her face appears in mirrors and in windows, and her shadowy body is often seen walking down the hall and through walls. Guests often reported someone knocking at the door, but when they answer, no one appears. When they take too long to answer, the doorknob will begin to twist. Mrs. White has also been reported to have appeared in many photographs.

Paranormal investigators have researched the house on nine different occasions.

In 2009, the beautiful inn on South Ash Avenue in Casper was sold to Turning Point, Self Help Center, and is no longer an Inn/Bed and Breakfast.

If you like reading about Haunted Hotels, check out these other stories: