The Woodland period, lasting from about 3,000 BC to 1000 AD, is an archaeological classification of Native American cultures of North America prior to European contact.

The term “Woodland Period” was introduced in the 1930s as a generic term for prehistoric sites falling between the Archaic hunter-gatherers and the agriculturalist Mississippian cultures.

Within this era, the classification is further divided into three more periods based on changes in the way people lived, including their settlement patterns, trading activities, subsistence, the tools they used, and mortuary practices. 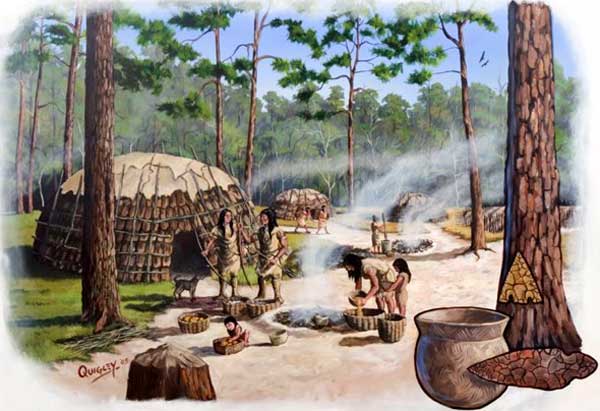 These three additional eras include:

By the beginning of the Woodland period, climatic conditions had reached an approximation of the modern-day climate. This era is considered a developmental stage that was characterized by increasing cultural complexity and population growth. During this time, people widely adopted horticulture, pottery-making, the bow and arrow, and complex ceremonies surrounding death and burial.

The Woodland period is marked by the manufacture of ceramic vessels, construction of mounds, the rise and fall of a vast exchange network, unequal distribution of exotic raw materials and finished goods, and horticultural activity. 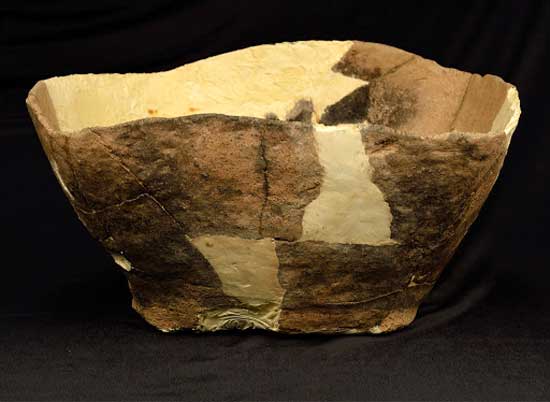 Until quite recently, the onset of the Woodland period was assumed to have been the time of the initial appearance of pottery vessels, the beginnings of mound ceremonialism, the emergence of sedentary village life with well-defined structures and settlements, and intensive cultivation of crops. However, it is now clear, that the beginnings of these developments lie deeper in the past by a thousand years or more. Mound construction dates back to at least 3000 BC. Intensive cultivation of native food crops such as chenopodium, sunflowers, and gourds was widespread by 1000 BC. And, in some regions, pottery predates the onset of Woodland cultures by over 1000 years.

The Early Woodland lasted from about 3000 BC to 200 BC. The transition from the Late Archaic to the Early Woodland is marked by an increase in cultural developments that can be traced to the Middle and Late Archaic. Although pottery, horticulture, and earthen mounds were familiar to some people who lived during the Archaic period, after about 1000 BC such innovations became widespread across Eastern North America.

The Early Woodland period continued many trends that began during the Late Archaic period, including extensive mound-building, regional distinctive burial complexes, the trade of exotic goods across a large area of North America, the reliance on both wild and domesticated plant foods, and a mobile subsistence strategy in which small groups took advantage of seasonally available resources such as nuts, fish, shellfish, and wild plants. Pottery, which had been manufactured during the Archaic period in limited amounts, became widespread across the Eastern Interior, the Southeast, and the Northeast. The Far Northeast, the Sub-Arctic, and the Northwest/Plains regions widely adopted pottery somewhat later, about 200 BCE.

The people of this era lived in small bands of related families, who shared a base camp most of the year. However, they would leave as needed to hunt or fish in the surrounding areas. Unlike the people of the Late Archaic people, Early Woodland peoples generally did not travel long distances from their base camps. As a result, the long-distance exchange networks that developed during the Late Archaic broke down. Another result of people not moving around as much was that the various bands did not see each other and share ideas as often, so styles of making pottery and tools became very distinct from region to region.

The earliest pottery included some that were made from plant fibers that were more typical of the Archaic period. However, this pottery was not widespread, and most pottery was made with clay, tempered with crushed rock or limestone. Between 1500 and 1000 BC, people began using sand to temper the clay and pottery-making became much more common and widely distributed. Various types of pottery were made including bowls, jars, and serving, storage. and cooking containers. Many were decorated with stamped, punctuated, pinched, or brushed designs, and some were painted. The pottery was sometimes traded with other groups.

The stone tools of this period were similar to those made during the Archaic. People continued to make stemmed points with broad blades, but they were slightly smaller. Stone was used from nearby sources for making tools and tubular stone pipes first appeared during his period that were likely used for ritual and ceremonial smoking.

A remarkable development of the Early Woodland was the widespread construction of earthen mounds. Though this practice seems to have originated in the Archaic Period in what is now, Louisiana, by about 1000 BC the tradition was adopted by people all over eastern North America. These mounds, varying in size and shape, were generally were built on top of burial pits or tombs of important individuals. Many of the graves included rich goods such as copper bracelets, beads, art objects made from mica, hematite, banded slate, and other kinds of stone. Other items included projectile points, natural pigments like ocher, or a few special trade items. 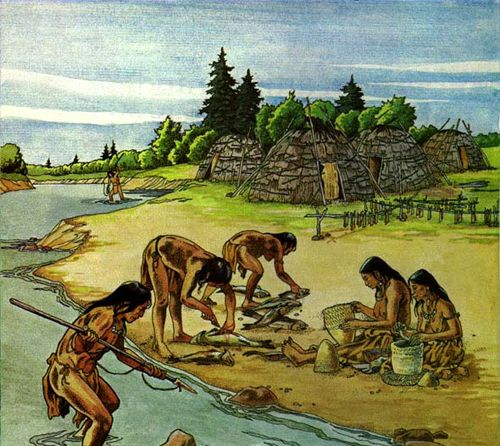 The Middle Woodland period, lasting from about 200 BC to 600 AD, is marked by changes in settlement and subsistence patterns as populations increased and people began to spread into other areas to take advantage of diverse food resources. As populations grew, people began to settle into larger villages and roup territories became more defined.

By this point, the people were tending gardens and gathering shellfish from the local rivers, which enabled them to live in one place for long periods of time without having to hunt for food as often. However, an increase of exotic artifacts at Middle Woodland sites indicates that there was more interaction between different regions than there had been during the Early Woodland. Some of these artifacts and materials were not local to the people such as copper from the Great Lakes area, mica from the southern Appalachians, and shells from the Gulf coast.

The most remarkable aspect of Middle Woodland culture is the development of the Hopewell Culture.which was characterized by large, geometric earthworks and conical mounds that contained elaborate tombs with many exotic grave offerings including jewelry and art pieces made of copper, mica, obsidian, and ocean shells, as well as long, stemless, stone projectile points. The elaborate tombs are especially important because they indicate that the person buried there had a higher and/or special status. The Hopewell culture first developed in what is now the Ohio Valley and other parts of the Midwest and gradually spread southward.

The Late Woodland period began about AD 500 and lasted about 500 years, until AD 1000. During this time, populations increased and settlements filled up the landscape, spreading northward up small streams. People continued to live in base camps, but their increased numbers led to competition for resources and an increase in warfare. This period was also characterized by a lack of the non-local artifacts and materials that had been seen in the previous 500 years.

Despite the apparent reduction of inter-regional exchange, the Late Woodland period was a time of important cultural changes, including the appearance of the bow and arrow in about around AD 700. The bow and arrow made hunting less of a communal activity than it had been in the past, and individual families became more self-sufficient. People began making stone projectile points that were shorter, thinner, and more triangular so they could be attached to arrows.

Middle Woodland people still hunted, fished, and gathered wild foods, but they also spent increasing amounts of time tending their plots of maize, squash, and other plants. Because they now grew food that could be stored, people developed large, rounded jars used for storage. 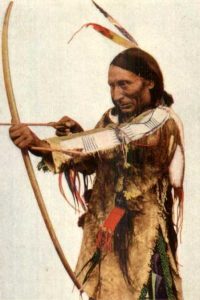 As the Hopewell culture declined, mortuary practices became more variable and simplified. Small amounts of exotic items still occurred in Late Woodland graves, but they seemed not to have been part of an elaborate mortuary complex. The decline in ceremonialism may indicate the development of a new form of religion that focused on a reverence for the ancestors of certain lineages. There is evidence that many small groups occasionally gathered together to build mounds and maintain long-range ties. Likely as a result of these regional gatherings, pottery from different places developed widespread similarities in form and decoration. Additionally, the mound centers expanded their functions from places of burial to places where civic and ceremonial functions occurred.

And these changes set the stage for the developments that would take place in the Mississippian period.