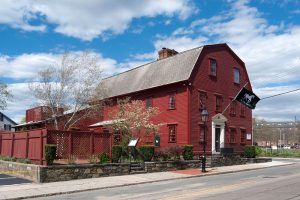 The White Horse Tavern in Newport, Rhode Island was established in 1673 and holds the oldest tavern license in the country. By Kenneth C. Zirkel, Wikipedia

The White Horse Tavern in Newport, Rhode Island is the oldest tavern still in operation in America. Not only does it hold this distinction, but it is also listed on the National Historic Register of Historic Places, and it should come as no surprise that it is said to be called home to a couple of resident ghosts.

Located on the corner of Farewell and Marlborough Streets, the first building on this site was constructed in 1652 by Francis Brinley as a residence for his family. For the next 20 years, he lived in the two-story, two-room residence.

In 1673, William Mayes Sr. saw the commercial possibilities of the building and purchased it. After enlarging the structure, he turned it into a tavern and inn. Mayes officially obtained a tavern license in 1687. His son, William Mayes, Jr., a notorious pirate that operated in the Red Sea, also helped run the tavern at times. After his criminal adventures, he would return to Newport with his bounty, where he was openly welcomed and protected by the townspeople. William Jr. inherited the tavern in 1702. However, the British authorities were not so forgiving, and shortly afterward, the tavern was operated by William, Jr.’s sister, Mary Mayes Nichols, and her husband, Robert. For the next 200 years, with one brief interruption, the Tavern remained in the Nichols family.

In the 1720s, an overnight guest of the inn died in his sleep. Dying of unknown causes, authorities feared a communicable disease and sent Mary Nichols and an Indian girl who worked at the inn to Coaster’s Harbor Island in Narragansett Bay, which was used as a quarantine island at the time. While there both women were infected with smallpox. Mary survived to later return home, but the Indian girl died of the disease. 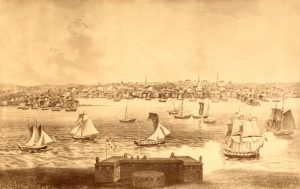 During these early years, the tavern served as a center of local affairs throughout the early years of Newport. The Town Council met here, as did the colony’s General Assembly while Richard Munday’s Colony House was under construction in 1739. At other times the building was also used for large meetings and by the Criminal Court.

During the American Revolution, British warships arrived in Newport’s harbor in December 1776. For the next three years, British soldiers occupied the city. Many of the towns’ residents, including Walter Nichols, who then owned the tavern, fled the city during this time. While Nichols was gone, the tavern was occupied by British troops. When they finally left in 1779, Nichols returned and reopened the tavern. He also added the gambrel roof and enlarged the structure to its present dimensions.

In 1895, the Nichols family sold the property to Thomas and Bridget Preece, who turned it into a boarding house. By 1954, the old tavern showed years of use and neglect and through the generosity of the Van Buren family, the property was acquired by the Preservation Society of Newport County. For the next three years, the building was carefully restored and again opened up as The White Horse Tavern. 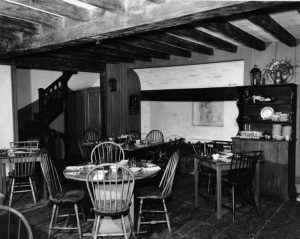 In 1972, the Tavern was recognized as a National Historic Landmark and added to the National Register of Historic Places.

In 1981, The White Horse Tavern again became privately owned, when O.L. Pitts of Fort Worth, Texas, and three partners purchased the Tavern, as sponsors of America’s Cup. Later it was purchased by Paul Hogan, a Newport native, and in 2014, it was sold to a Newport-based group.

Today, the 350+-year-old building remains a popular drinking and dining location that is known as one of Newport’s finest restaurants.

The two-and-one-half-story clapboarded building is also of great architectural significance, as its original section is one of the earliest structures preserved in the state. Much of the 17th-century character of the interior is still intact and is well maintained.

However, along with its long history, beautiful structure, and upscale ambiance, some say that the old building is called home to several spiritual residents. 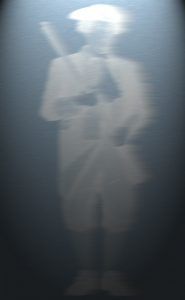 One of these is said to be the man who died at the inn in the 1720s. He has been seen by staff and guests dressed in common, shabby Colonial attire, most often in the main dining room by one of the fireplaces. He has also been spied in the upstairs men’s bathroom.

Another unseen entity has been known to tap staff on their shoulders and is said to act as a guardian of the building. A little girl has been heard crying near the restrooms on the second floor when no one is there. The entity of a female has been seen floating above the dining tables and was even captured in a photograph. Heavy footsteps are sometimes heard in unoccupied rooms.