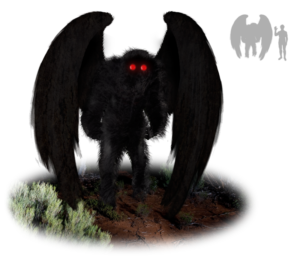 In Point Pleasant, West Virginia, a large humanoid creature called the Mothman was sighted decades ago by two young couples who fled the dark woods in terror.

On November 15, 1966, Roger and Linda Scarberry and Steve and Mary Mallette reportedly saw a “large flying man with ten-foot wings” with glowing red eyes when they were driving along State Route 62 just north of Point Pleasant. They saw a menacing figure standing six to seven feet tall near an abandoned National Guard Armory building and power plant. Panicking, Roger Scarberry immediately sped away from the large gray creature making their way to Point Pleasant while the Cryptid followed.

When they arrived in Point Pleasant, they reported the strange sighting to the police, stating the “thing” rose up like a helicopter. Though saying it was a “clumsy runner,” it excelled in gliding, easily keeping pace, even as the car reached a hundred miles per hour.

The couples had seen this bizarre creature, dubbed the “Mothman,” in the “TNT” area. It was called the TNT area because during World War II, that region, comprising more than 8,000 acres, was devoted to an ammunition manufacturing facility that employed a few thousand people at its peak.

For safety reasons, the explosives were stored in bunkers strategically scattered across the territory and disguised by a thick layer of earth. After the war, the facility and the area were mostly abandoned by the military and partly converted into a wildlife management area and partly a landfill.

The Point Pleasant Register reported the unusual sighting on November 16, 1966, titled “Couples See Man-Sized Bird… Creature… Something”. The national press soon picked up the reports and helped spread the story across the United States.

More reports were made in the next few days. Two volunteer firemen who saw it said it was a “large bird with red eyes.” When contractor Newell Partridge saw the Cryptid and aimed a flashlight at the creature in a nearby field, he said its eyes glowed “like bicycle reflectors.”

Mason County Sheriff George Johnson commented that he believed the sightings were due to an unusually large heron he called a “shitepoke.” Wildlife biologist Robert L. Smith, a wildlife biologist at West Virginia University, told reporters that descriptions and sightings fit the sandhill crane, a large American crane almost as tall as a man with a seven-foot wingspan featuring circles of reddish coloring around the eyes. Because this crane was not native to this region, he hypothesized that the bird may have wandered out of its migration route. 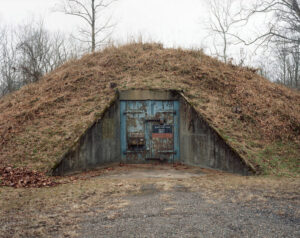 The following year, people continued to see the mysterious Mothman around Point Pleasant and slowly moving outward. Eventually, there were Mothman sightings in other places in the United States and even in Russia.

In an estimated 100 reports, some claimed sightings connected with UFOs, and others claimed that a military storage site was Mothman’s “home.” According to competing theories, Mothman emerged from either the depths of hell or the upper echelons of space. Others said the Mothman attacked the roofs of parked cars, lurked outside homes, chased cars, and stole pet dogs.

The sightings continued until the Silver Bridge, carrying U.S. Route 35 over the Ohio River between Point Pleasant, West Virginia, and Gallipolis, Ohio, collapsed on December 15, 1967. Collapsing under the weight of rush-hour traffic, 46 people were killed. The bridge was carrying much heavier loads than it had originally been designed for and had been poorly maintained. The collapse was caused by the failure of a single eyebar in a suspension chain. However, afterward, people began to claim they had seen the Mothman standing on the bridge the day before, possibly as an omen of the disaster to come.

The Mothman was introduced to a broader audience by Gray Barker in 1970 when he linked the collapse of the Silver Bridge to the Mothman. It was later popularized by John Keel in his 1975 book The Mothman Prophecies, claiming that there were supernatural events related to the sightings and a connection to the collapse of the Silver Bridge. The book was later adapted into a 2002 film starring Richard Gere, which launched the Mothman and Point Pleasant onto the national stage. 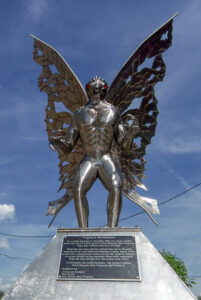 Jeff Wamsley, a Point Pleasant native who grew up listening to the Mothman stories, released two books on the subject: Mothman: Facts behind the Legend in 2001 and Mothman: Behind the Red Eyes in 2005. In 2006, Wamsley opened the Mothman Museum to showcase his assembled archival material, including police reports and witness accounts from various sightings.

“I think the Mothman story is timeless. It’s never been fully solved or proven as to what these people were seeing.” — Jeff Wamsley

In addition to the museum, Point Pleasant hosts the annual Mothman Festival on the third weekend in September. Commemorating the visit of the mysterious entity known only as “The Mothman,” the festival features guest speakers, live bands, vendors, pictures at the Mothman Statue, TNT bus tours, and more. Embracing the legend, the annual Mothman Festival draws in more tourists than the town’s population.