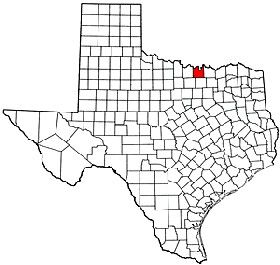 In the mid-1880s, Cooke County, Texas, on the northern border of the Lone Star State, and the Chickasaw Nation just north in Indian Territory, were plagued by a gang of horse and livestock thieves led by James Lee and his brothers, Tom and Pink.

James Lee was married to a Chickasaw woman who gave him the “right” to ranch in the Chickasaw Nation. Brothers Tom and Pink helped him with the ranch, located on the Red River near Delaware Bend and just east of Thackerville. But, the Lee brothers weren’t really in the mood to do any “real” ranching; rather, they would confiscate the herds of their neighbors, especially the large ranch of the Roff Brothers in the Arbuckle Mountains about two miles east of Berwyn. The Lee Ranch, located about twenty miles south of the Roff Brothers, soon became a safe haven for bandits and outlaws traveling between the Chickasaw Nation and Texas.

The Lee brothers and their cohorts, who became known as the Lee Gang, didn’t limit their rustling to just the ranch of the Roffs’; they were stealing cattle and horses from local ranches throughout Cooke County and the Chickasaw Nation.

In the meantime, Ed Stein, the Lees’ brother-in-law, owned a store across the Red River in Texas, who peddled the majority of liquor into the Chickasaw Nation, a crime, in and of itself.

Both the white settlers and the Indians were up in arms about this lawlessness and plead for help from the authorities; however, the area was rampant with outlaws committing numerous crimes, and there was no immediate response. The thievery continued.

In late April 1885, when Jim Roff was checking his cattle, he noticed a group of several men rounding up a small herd. As he rode toward them, the men fled, leaving a cloud of dust behind them. Roff found that the cattle were marked with a number of brands from neighboring ranches. Deciding to investigate further, Roff hid in a nearby ravine, and before long, the rustlers returned and herded the cattle south.

Roff wasted no time telling the story to his neighbors, who, along with U.S. Marshal James Guy, went after the culprits. On May 1, 1885, a five-man posse made up of Marshal Guy, Bill Kirsksey, Frances Mathes, and Andy and James Roff, followed the cattle trail to Delaware Bend, right up to the Lee Ranch. 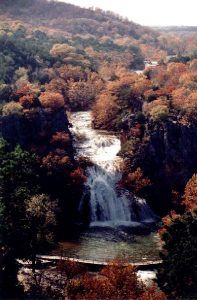 Turner Falls in the Arbuckle Mountains of Oklahoma

As the posse carefully approached the log cabin, they noted that gun portholes had been cut into the side of the building and called out to the occupants. Ed Stein, Lees’ brother-in-law, responded by directing them to the rear of the cabin. But, it was a trap. The posse men were ambushed as a hail of lead came forth from the cabin, killing Jim Roff and Bill Kirksey instantly, both having two bullets through their bodies. Andy Roff, badly wounded, made his way to a nearby tree where he sat down and leaned against it. Later, it was found that two more shots were blasted into the injured man – one through his chest and the other into the lower part of his body.

The other members of the posse were able to escape to tell of the ambush, saying they believed there were ten to twelve men in the cabin. Thought to be hiding inside were Jim, Tom, and Pink Lee, Ed Stein, Tom Cole, Jim Copeland, Della Humby, and the Dyer brothers. Two days after the ambush, a mob converged on the Lee Ranch and burned every building. The Dyer brothers were soon tracked down and lynched by a vigilante group. Rewards totaling some $7,000 were posted for the Lee brothers and Ed Stein, dead or alive, and the hunt for the killers was on.

Tom Lee and Ed Stein were tracked down in Denison, Texas, where they surrendered and were sent to Ft. Smith, Arkansas for trial. However, the pair were acquitted. Stein returned to his bootlegging activities and drank himself to death a short time later. Tom Lee was arrested on a charge of larceny and was sent to prison. After his release, he was rumored to have been a wandering gambler. He died in 1925.

The leaders of the Lee Gang – Jim and Pink, remained at large until September 7, 1885. Legendary lawman Heck Thomas had been doggedly trailing the pair, and upon receiving a tip, he tracked them to the John Washington Ranch near Delaware Bend on the banks of Lake Texoma. Thomas, along with Jim Taylor, and a posse, caught the pair off-guard, surrounded them, and ordered the fugitives to surrender. Instead, the Lee boys answered with their Winchesters, and the inevitable shoot-out ensued. When the smoke cleared, the brothers lay dead. No one in the posse was wounded.

The bodies were loaded into a wagon and taken to Gainesville, Texas, where Thomas and Taylor collected the reward.

The next day, the newspapers proclaimed: “The Lee brothers, the most notorious desperadoes in Texas finally go down with their boots on.”  The press also attributed at least forty murders to the Lee Gang, but this has never been verified.

These three were arrested shortly after the murders occurred, but Jim and Pink Lee, for whom there is a reward of $5,000, are still at large. The other two are Jim and Jake Tobler, the two Negroes who murdered Frank Cass and Goodykooniz. These latter two were brought in by Deputy Marshal W. F. Jones, and on the way down, they gave the officer a full account of the horrible deed.

The confession made to the officer does not differ materially from that made to the citizens of Vinita, except that it is more full. Jake Tobler says he killed Goodykoontz by shooting him twice, while Joe killed Cass by shooting him one time, and then killed the dog. They claim to have only gotten $4 in money. They took clothing of their victims, a watch worth $20, a shotgun, rings, underclothing, etc., all of which were found in possession of the Negroes when arrested, together with the horses. The murderers were wearing the clothing. The murder was committed about 3 o’clock in the morning, and at daylight, the murderers were only five miles from the scene. They know the murdered man well and expected to get a large sum of money, as they had heard Cass say some time previous that he and Goodykoontz were going West to buy cattle. They expect to be hung and have given up all hopes of life. 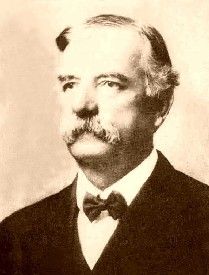 Gunfighters & Lawmen of the American West