Arizona’s Worst Disaster by Jim Liggett is a book about the Walnut Grove Dam Disaster of 1890. Even today it is the largest natural disaster in Arizona’s history. It was located on the Hassayampa River north of Wickenburg, Arizona, and was built to provide water for hydraulic mining and irrigation. At the time Prescott, Arizona was the capital of the Arizona Territory before it became a state in 1912.

The book recounts the story of the Walnut Grove Dam from conception to failure to the legal consequences. The tale includes colorful characters such as Henry Wickenburg, Buckey O’Neill, and Governor Alexander Brodie. Subsequent attempts to rebuild the dam and the fate of the Hassayampa River over the past century are included.

In the early morning hours of February 22, 1890, water was overtopping the dam by three feet when it finally gave way. The superintendent of the dam had a strong feeling this was going to happen, so he had sent a rider downstream to warn people to get out of the canyon to higher ground. The story goes that the rider passed by a saloon, purchased a bottle of whiskey, and never made it downstream to warn anyone. In the end, it was estimated that 70 to 100 people lost their lives as the wall of water swept through the canyon towards Wickenburg.

Professor Liggett, in his research, goes back to the time when the dam was proposed and how it was financed. At that time many of the investors were from back East and that meant selling interest into a water company so they could build the dam. As you read you can see how people that knew nothing about the project were out hustling money for investment. Not much different than today.

The purpose of the dam was to supply water for hydraulic mining downstream along with irrigation. The gold mining was the flashpoint to investors as they were hoping to cash in on a large return as gold strikes had abounded in the area and the streambeds were plentiful with gold nuggets. The water company they were investing in was set to reap a nice return for the supply of water to the goldfields.

As you read the book you will see that what we take for granted today, as far as engineering and hydrology, were not present at that time. This led to a major problem in the design of the dam and combined with the lack of historic information on water flows ultimately led to its failure in the end. 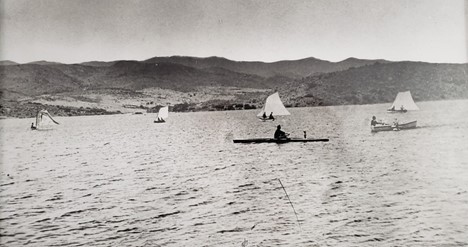 When they first started building the dam the structure was leaking so bad it was said fish were swimming through it. They stopped construction, hired another engineer and construction company to start rebuilding it from the ground up. In the end, the dam was built to a height of 110 feet and when filled held back nine billion gallons of water. It was a reservoir that people were boating, fishing, and hunting on. It was also short-lived.

At that time, John Wickenburg for whom the town was named, owned the Vulture Gold Mine. It was rich in gold ore and a large processing mill had been set up on the Hassayampa River to process the ore at a little town called Seymore, just downstream of Wickenburg. Without the mill, Seymore probably would have never existed but in its heyday, it had over 200 residents along with a saloon and laundry. 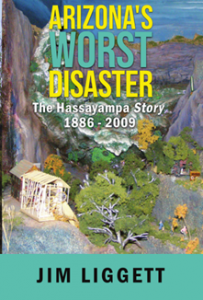 Professor Liggett goes on to weave the stories together about the losses incurred downstream and the people who lost everything. One story was of Bob Brow’s saloon that had been washed away along with its safe and a barrel of whiskey. In a newspaper twenty years later, it mentioned that the safe had never been found. Bob Brow went on to own the Palace Saloon in Wickenburg which is still in operation today.

About the author: Jim Liggett graduated high school in Prescott, Arizona, and then on to Texas Tech University in Lubbock and from there to Stanford where he received his masters and Ph.D. degrees in engineering.

Later Jim went on to join the faculty at Cornell University where he remained for 35 years. After retiring he returned to Wickenburg, Arizona where he joined a hiking group and became interested in the Walnut Grove Dam. His book is an attempt to fill in a gap in the territorial history of Arizona since this major and defining event is largely ignored in the history books.

The Johnstown, Pennsylvania Flood of 1889