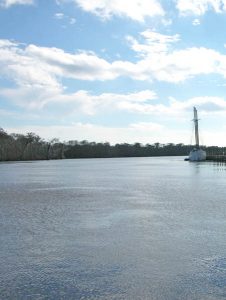 The Waccamaw people were one of the small tribes formerly dwelling on the Lower Pedee River and its branches in South Carolina and the adjacent border of North Carolina.

Nothing is known of their language, and very little else concerning them, as they were never prominent in history. Their associations indicate that they were of the Siouan Family. Their habitat was along the Waccamaw River, which enters the Pedee from the north almost at its mouth. They were mentioned first in 1715 as living near the Winyaw, both tribes receiving ammunition from the Cheraw, who attempted to gain them as allies of the Yamasee and other tribes against the English. At this time, they were living in six villages with a population of 610.

In 1755 the Cherokee and Notchee were reported to have killed some Pedee and Waccamaw in the white settlements. Like the Pedee, Cheraw, and other tribes of that region, they probably finally incorporated with the Catawba.