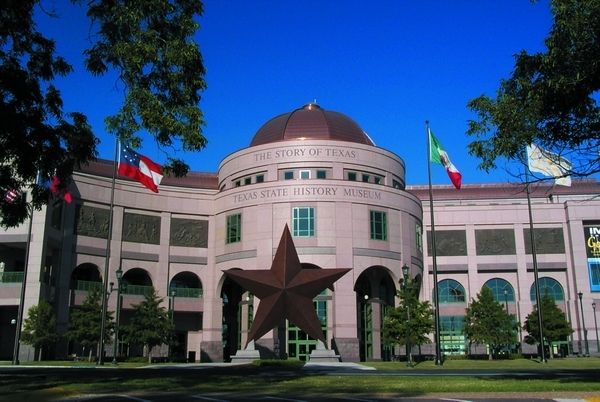 Opened in 2001, the museum was the dream of former Texas Lieutenant Governor Bob Bullock, who, in 1996, began pushing for a state history museum to be built in Austin, the state’s Capitol. The project was approved by the Texas Legislature in 1997 and construction began in 1998.

Part of Bullock’s vision was to have the museum be within view of the Capitol building and be worthy of the state name.

Located at the intersection of Martin Luther King, Jr. Boulevard and Congress Avenue in downtown Austin, the building and it’s contents live up to that vision.

Legends of America was fortunate to receive a personal guided tour of the museum from Linda Pybus Glover, a docent and chair-elect of the Volunteer Advisory Committee. After an interim position on the museum’s education staff, Glover wrote Expedition To The Texas Coast: Exploring The Wreck of the French Ship La Belle, the museum’s online curriculum for fourth and seventh grade Texas history students.

Constructed with granite from the same quarry used for the Texas Capitol, the museum is topped by a majestic copper dome and features six sculpture panels on the front of the building showing different chapters of the state’s history. The museum’s Lone Star Plaza features a 35-foot tall bronze star and the six flags of Texas flying on 50-foot tall flagpoles.

Walking into the Museum’s expansive lobby you are greeted by a large four-story rotunda and a unique 40-foot diameter terrazzo design centered in the floor depicting a campfire scene of enduring themes from Texas‘ past. Around the edge of the design reads “Born Around the Campfires of Our Past — The Story of Texas.”

After walking through the rotunda and into the Grand Lobby, you find yourself standing on a polished granite map of Texas about 50 feet in diameter. Then you are ready to enter the museum’s three floors of engaging, state-of-the-art exhibits, and 17 different media and interactive experiences, tracing Texas history from before European exploration to recent times. With 34,000 square feet of exhibit space, it truly does tell The Story of Texas. Designed as a non-collecting museum, each of the three floors is theme-based to accommodate over 700 artifacts, most of which rotate in and out from other museums, the state archives and other state agencies, as well as private donors.  This rotation allows visitors to return on a regular basis to continue to learn the unfolding chronicle of Texas history as they view newly acquired collections.  In addition, the special exhibit hall features three or four unique exhibits annually. 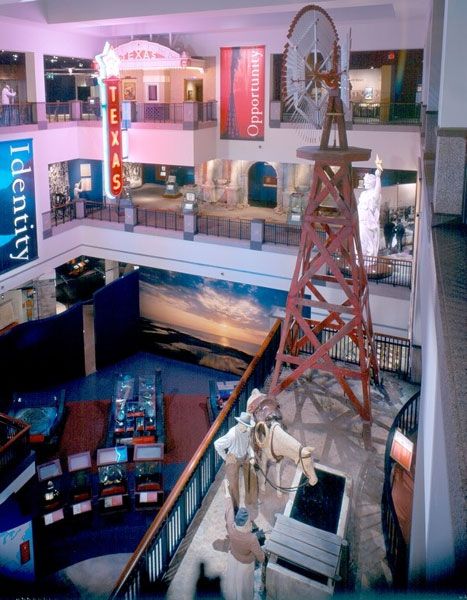 View of the Exhibit Hall, photo courtesy of TSHM

The first-floor theme, Encounters on The Land, explores the meeting of diverse cultures as well as man’s encounter with the diverse landscapes of the state.  After an introduction to pre-Columbian Native American and Spanish Conquistadors in Texas, visitors are drawn to the saga of the famous French Explorer, Robert Cavelier, Sieur de La Salle. La Salle’s ill-fated mission to establish a settlement at the mouth of the Mississippi River was thwarted when he missed the mouth of the river and wound up in Matagorda Bay on the Texas Coast. When LaSalle and a few of his entourage were off on foot in search of the great river his one remaining boat, La Belle, a fifty-three-foot barque ran aground in a storm, sank, and lay on the floor of the Gulf of Mexico for more than 300 years. The contents onboard tell the story, along with the narrative journal of Henri Joutel. The Texas Historical Commission recovered the remains in the mid-1990s. Currently, the hull of the ship is undergoing preservation at the Marine Archaeology facility of Texas A & M University, College Station. Many of the artifacts are on display in the Texas State History Museum as well as six smaller Museums along the Texas coast as part of the La Salle Odyssey Project. The benchmark artifact is a magnificent bronze cannon from the La Belle. Three identifying symbols—King Louis’s crest, two leaping dolphin handles and the crest of the commandant of the French Navy, confirm the ship’s French registry. In 2013, the hull of La Belle will be reassembled in the museum. The remainder of the first floor is devoted to the mission era, immigration and colonization by settlers from primarily New Spain and Mexico, the United States and Europeans in the 19th Century, as well as displays on Native Americans, and westward expansion. 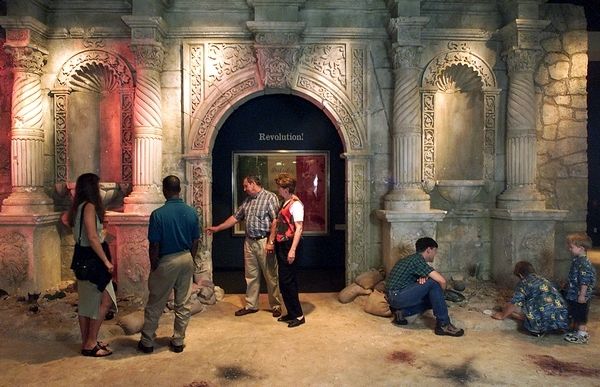 The second-floor theme is Building the Lone Star Identity and starts in the 1820s with Anglo interest in Texas led by Stephen F. Austin, with exhibits and interactives recounting the people and events leading up to the Texas Revolution all the way through the Texas Centennial in 1936. Following the Battle of San Jacinto in April 1836, where the Mexican army under Santa Ana surrendered to the Texians under the leadership of Sam Houston, Texas was a Republic for almost ten years. The most illustrious of her four presidents, Houston led the country toward US statehood in 1845, and later became the governor who was forced to resign when he refused to sign papers leaving the Union in favor of the Confederacy. Texas left the Union during the Civil War. In addition to artifacts, this floor features the Texas Capitol building’s original Goddess of Liberty statue, as well as the “Revolution Theater,” built to resemble the Alamo the day after its famous battle. The theater features a video presentation about the fight for Texas Independence told from the perspective of Juan Seguin, a Tejano political and military leader who assisted in the defeat of Santa Anna’s troops at the Battle of San Jacinto. 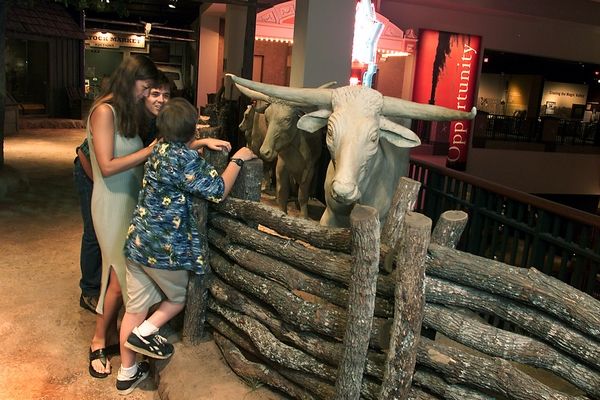 The third floor of the museum focuses on the theme Creating Opportunity, embracing the many ways people have made a living in the Lone Star State. It traces the history of ranching, how oil changed Texas, the colorful history of the military—from the early Texas Rangers, the United States Cavalry on the frontier, to the numerous bases in the state today whose men and women train and deplore to protect our freedom worldwide. New frontiers in space, medicine and technology that began in, and continue in, Texas today are also found on the third floor. This floor also features an AT-6 “Texan” airplane, an Apollo-era spacesuit, and a moon rock as well as a special audiovisual exhibit on Texas music and sports. Theaters on this floor include “Connecting Texas,” where visitors can enter a replica of the old Abilene rail station and go to one of nine different locations, the “Reel Cowboy Theater,” which compares Hollywood’s image of cowboys to real life, and the “Oil Tank Theater,” complete with antique oil company memorabilia and a video narrated by the late Walter Cronkite.

While you are at the museum, don’t miss the Texas Spirit Theater on the second floor, the biggest multimedia special effects theater of its kind in Texas. An audience of up to 200 gets a unique experience from three screens and thrilling special effects. The feature presentation is “The Star of Destiny”, narrated by the character of Sam Houston, taking the audience on a journey through the history of the state, focusing on stories of perseverance and the spirit of Texas within its people. Another film, “Wild Texas Weather”, looks at both the past and present tumultuous weather of the Lone Star State. Promising to blow audiences right out of their seat, this energy-packed film takes the viewer on a 22-minute ride through some of the planet’s most unpredictable and wicked weather. The film is narrated by legendary singer-songwriter Ray Wylie Hubbard, with additional performances by Omar Kent Dykes, Toni Price, and Carolyn Wonderland. 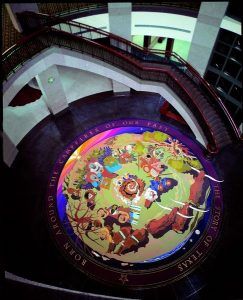 View of the Rotunda from above. Photo courtesy of TSHM

Other features of the Bob Bullock Texas State History Museum include a large indoor/outdoor cafe, Museum store, Austin’s only (as of this writing) IMAX Theatre with 2D and 3D capabilities, and an underground parking garage.

Kathy and I want to thank Linda Pybus Glover for the wonderful tour, and assistance in writing this article. We hope our readers have a chance to see this incredible museum for yourselves soon. The Bob Bullock Texas State History Museum is a division of the Texas State Preservation Board.

Source The Story of Texas