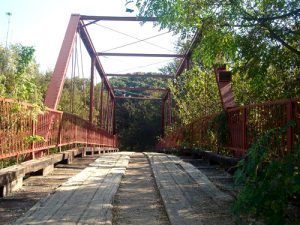 About 3.5  miles from the present-day town of Corinth, in Denton County, Texas, once stood the small village of Alton, which, for a decade, served as the Denton County seat. When Denton County was formed in 1846, the first pioneers chose a place along Pecan Creek for the first county seat and named it Pinckneyville in honor of Texas’ first governor, James Pinckney Henderson.

But, Pinckneyville would hold the title only two years and never develop into a town. Finally, water shortages forced the county seat to move to a new site in June 1848. Located less than a mile from present-day Corinth, the new townsite was called Alton on a high ridge between Pecan Creek and Hickory Creek.

Though Commissioners were appointed and directed to lay out a town and sell lots, no records were ever done, and no public buildings were ever erected. In fact, the only residence that existed was that of a man named W.C. Baines, who established a farmstead long before the designation of the new county seat.

Most of the time, county business was held at the Baines’ residence under the shade trees in his yard. However, the location of the second county seat also proved to be unfavorable due to a lack of potable water, and the state legislature soon directed that the site be moved again.

The third county seat location was designated in November 1850, about five miles southwest of present-day Corinth on Hickory Creek. The new site retained the name of Alton and submitted an application for a post office. This location did grow, and before long, it boasted a hotel and two stores.

By 1856, the small town boasted several homes, a blacksmith shop, three stores, a school, a saloon, a hotel, two doctors, and several lawyers. The Hickory Creek Baptist Church, which continues to stand, was organized in 1855.

Though the fledgling town had begun to grow, the location of the county seat was still unsatisfactory for the majority of Denton County residents, who soon petitioned for yet, another county seat – one that was more centrally located and again, one with better water. Put to a vote in November 1856; the county seat was moved again to Denton. Townsite lots began to be auctioned in January 1857.

In the meantime, Alton began to die as many of its businesses moved to the new county seat. Finally, in May 1859, its post office doors closed forever.

There is little remaining of the old townsite today, except for the Hickory Creek Baptist Church and the old Alton Cemetery, which contains graves that date back to 1852. The church is located at 5724 Teasley Lane ( F.M. Road 2181), Denton, Texas. Next to the church is the cemetery.

Years later, in 1884, long after Alton had died, an iron through-truss bridge was built over Hickory Creek on Copper Canyon Road, south of the old townsite. Built by the King Bridge Company of Cleveland, Ohio, the 145-foot long bridge would serve area travelers for more than a century. Called the Old Alton Bridge,  sometimes the Argyle bridge, and is better known amongst the locals as “Goatman’s Bridge,” it was first built to carry horses but would later carry vehicles across the creek. 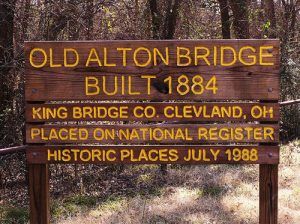 It continued to be used until about 2001 when it was replaced with a concrete-and-steel bridge and a new road, which straightened out a sharp curve. Before the new bridge was built, motorists were required to honk their horns on the one-lane bridge to let other travelers know they were coming.

The bridge was listed on the National Register of Historic Places in July 1988 and closed to vehicle traffic in 2001. It is open only to pedestrians today.

Not only is the Old Alton Bridge a picturesque historic site, but it is also said to be haunted by the “Goatman,” hence the nickname of the bridge.

Half a century after the bridge was built, an African-American man named Oscar Washburn settled with his family near the bridge. Earning his living raising goats, he was soon called the “Goatman” by the locals. An honest businessman, his goat raising business was a success. But, unfortunately, some did not welcome a successful black man within their midst. 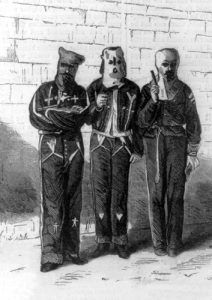 When Washburn posted a sign on the bridge that advertised “this way to the Goatman,” it angered local Klansman. On a dark night in August 1938, these hateful men crossed the bridge without their headlights, then burst into Washburn’s home and drug him from his family to the bridge.

The Klansman then fitted a noose over his head and pushed him over the side of the bridge. However, when they looked over to make sure he was dead, they could see only the rope. Washburn was gone and was never seen again.  The hateful Klansman then went back to his home and killed the rest of his family.

Ever since that fateful day, several strange things have reportedly occurred on and around the bridge. Many believe that the Goatman haunts the overpass and the nearby woods. The tale continues that when travelers crossed the bridge at night with their headlights off, they would meet the Goatman on the other side. These tales are obviously old, as the bridge has been closed to vehicle traffic since 2001.

Several other reports tell of numerous abandoned cars that have been found near the bridge, with their occupants missing.

Others report seeing a ghostly man herding goats over the bridge, while others say they have seen an apparition staring at them, holding a goat head under each arm. Stranger stories even include people having seen a creature that resembles a half-goat, half-man.

More tales of strange noises have also been described, including the sounds of horses’ hoof beats on the bridge, splashing in the creek below, maniacal laughter, and inhuman like growling coming from the surrounding woods.

Visitors sometimes tell of seeing mysterious lights in the area, car doors locking and unlocking of their own accord, and numerous vehicle breakdowns while near the old viaduct.

According to legend, if you visit on Halloween and honk your car horn twice, visitors can see Goatman’s glowing eyes.

And, the Goatman is evidently not alone. Other reports tell of a woman’s spirit who wanders the area, allegedly searching for her lost baby. Maybe that spirit is that of La Llorona, who is well known as haunting the rivers of the Southwest.

The bridge is located about seven miles south of Denton. Take I-35E S/US-77 S  to exit 463 and merge into the  I-35 Frontage Rd. Turn right at Lillian Miller Pkwy and go 0.8 miles, where the road becomes Farm to Market Rd 2181/Teasley Ln, continue 3.2 miles, and turn right at Old Alton Rd.