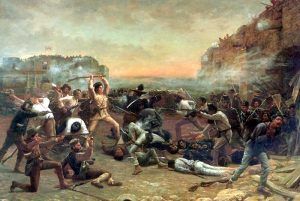 In the course of a week, the Mexicans lost 300 men. But, still, reinforcements were continually arriving, so that their numbers were on the rapid increase. The garrison no longer cherished any hope of receiving aid from abroad.

On the dates of March 4th and 5th, 1836, we have the last lines which Crockett ever penned.

“March 4th. Shells have been falling into the fort like hail during the day but without effect. About dusk, in the evening, we observed a man running toward the fort, pursued by about half a dozen of the Mexican cavalry. The bee-hunter immediately knew him to be the old pirate, who had gone to Goliad, and, calling to the two hunters, he sallied out of the fort to the relief of the old man, who was hard-pressed. I followed close after. Before we reached the spot the Mexicans were close on the heels of the old man, who stopped suddenly, turned short upon his pursuers, discharged his rifle, and one of the enemies fell from his horse. The chase was renewed, but finding that he would be overtaken and cut to pieces, he now turned again, and, to the amazement of the enemy, became the assailant in his turn. He clubbed his gun and dashed among them like a wounded tiger, and they fled like sparrows. 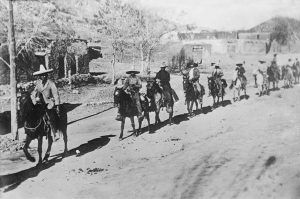 By this time we reached the spot, and, in the ardor of the moment, followed some distance before we saw that our retreat to the fort was cut off by another detachment of cavalry. Nothing was to be done but fight our way through. We were all of the same mind. ‘Go ahead!’ cried I; and they shouted, ‘Go ahead, Colonel!’ We dashed among them, and a bloody conflict ensued. They were about twenty in number, and they stood their ground. After the fight had continued about five minutes, a detachment was seen issuing from the fort to our relief, and the Mexicans scampered off, leaving eight of their comrades dead upon the field. But we did not escape unscathed, for both the pirate and the bee-hunter were mortally wounded, and I received a saber-cut across the forehead. The old man died without speaking, as soon as we entered the fort. We bore my young friend to his bed, dressed his wounds, and I watched beside him. He lay, without complaint or manifesting pain, until about midnight, when he spoke, and I asked him if he wanted anything. ‘Nothing,’ he replied, but drew a sigh that seemed to rend his heart, as he added, ‘Poor Kate of Nacogdoches.’ His eyes were filled with tears, as he continued, ‘Her words were prophetic,  colonel,” and then he sang in a low voice that resembled the sweet notes of his own devoted Kate:

‘But toom cam’ the saddle, all bluidy to see, And hame came the steed, but hame never came he.’

He spoke no more, and a few minutes after died. Poor Kate, who will tell this to thee?

The Alamo Today by Kathy Weiser-Alexander.

The romantic bee-hunter had a sweetheart by the name of Kate in Nacogdoches. She seems to have been a very affectionate and religious girl. In parting, she had presented her lover with a Bible, and in anguish of spirit had expressed her fears that he would never return from his perilous enterprise.

Before daybreak on March 6th, the citadel of the Alamo was assaulted by the whole Mexican army, then numbering about three thousand men. Santa Anna in person commanded. The assailants swarmed over the works and into the fortress. The battle was fought with the utmost desperation until daylight.

Only six of the Garrison then remained alive. They were surrounded, and they surrendered. Colonel Crockett was one. He at the time stood alone in an angle of the fort, like a lion at bay. His eyes flashed fire, his shattered rifle in his right hand, and in his left a gleaming bowie-knife streaming with blood. His face was covered with blood flowing from a deep gash across his forehead. About twenty Mexicans, dead and dying, were lying at his feet. The juggler was also there dead. With one hand he was clenching the hair of a dead Mexican, while with the other he had driven his knife to the haft in the bosom of his foe. 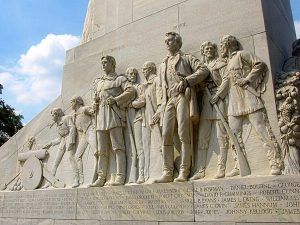 The Mexican General Castrillon, to whom the prisoners had surrendered, wished to spare their lives. He led them to that part of the fort where Santa Anna stood surrounded by his staff. As Castrillon marched his prisoners into the presence of the President, he said:

“Sir, here are six prisoners I have taken alive. How shall I dispose of them?”

Santa Anna seemed much annoyed, and said, “Have I not told you before how to dispose of them? Why do you bring them to me?”

Immediately several Mexicans commenced plunging their swords into the bosoms of the captives. Crockett, entirely unarmed, sprang, like a tiger, at the throat of Santa Anna. But before he could reach him, a dozen swords were sheathed in his heart, and he fell without a word or a groan. But there still remained upon his brow the frown of indignation, and his lip was curled with a smile of defiance and scorn.

And thus was terminated the earthly life of this extraordinary man. 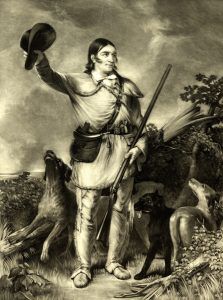 About the Author: Excerpted from the book David Crockett: His Life and Adventures, written by John Stevens Cabot Abbott and published by Dood, Mead & Co, New York in 1874. Abbott was an American historian, pastor, and writer, who published several other historical and religious books during his lifetime. The text as it appears here; however, is not verbatim as it has been edited for clarity and ease of the modern reader.