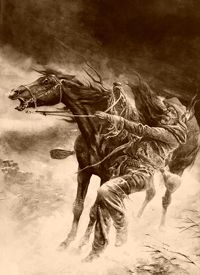 There were two of us engaged in prospecting in eastern Nevada in the winter of ’63-64 and thought we had struck it in the “Real del Monte,” as we named the dyke of yellow quartzite that lay like a ribbon in the mountain of slate. It was far up a deep canyon that cleft the Toi-ya-be Range that bounds Reese River Valley on the east. The canyon was very narrow, and in places, was impassable, where its bed was fully occupied by the little creek and fringe of birch and willows that grew rank and formed dense underbrush along it.

The canyon coursed from east to west, from the summit of the range, which was there about 10,000 feet above sea level. The south wall was almost perpendicular, but the north hillside had a gentle slope, and at a point where the canyon widened a little, we found a level spot wide enough to pitch our tent by excavating a little into the rocky hillside. There was a little space in front of the tent in the willows by the creek where we made our campfire.

The mine was on the hillside not far off and our eager work soon opened out a shaft a few feet deep, and which called for an examination by every prospector who passed in that direction. The winter had been mild, with little or no snow, but in March, there came a change and snow began falling at our altitude at a lively rate. It was my first experience, and I enjoyed the novelty with keen zest until nightfall, and then the barking of the coyotes and yelps of other wild animals kept me on the alert and awake a great part of the night. On the following day, my partner had to visit another camp 20 miles distant, and I was, for the first time, left alone, The snow began falling early in the evening and as I couldn’t stay out in it, I smothered the campfire and rolled a big dry pine log upon it that I might have coals in the morning.

Then I retired to the tent, laced up the flap covering the doorway, and to keep warm, went to bed. The snow fell very fast, and as it weighed down the willows along the creek, I could hear them bending and snapping in a startling manner, and this, with the piercing “ki-yi’s” of the coyotes, soon strung my nerves up to a pretty high pitch. I had been told that mountain lions and cinnamon bears were frequently seen in that section, and I soon thought the woods were full of them. Then, it dawned upon me that my pard had taken with him our only firearm, a revolver, and I was helpless if attacked. The snow fell steadily and by midnight was three feet deep, as I could tell by pressing against the walls of the tent. The coyotes and other animals kept up their startling cries and the dark canyon seemed filled with blood-thirsty beasts that were gathering around me and drawing nearer as the night advanced. I was several miles from any other camp and felt the loneliness of my position more as I reflected upon my helpless condition. 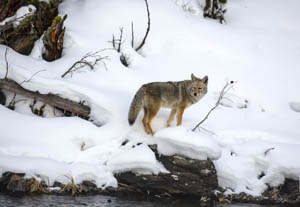 Coyote in the snow by Carol Highsmith.

There came a lull in the cries of the wild varmints and I finally dozed away into a light sleep. Later, I awoke with a start at some noise that came from the hillside back of the tent and just above it, where it was covered with broken slabs and flakes of slate, which in walking upon slipped away like shingles from under the feet. The snow now covered them, but an animal was just above me, walking around and reconnoitering. My heart nearly ceased beating as I fully awakened, for the smoldering campfire had, at last, ignited the pitch pine log and it was blazing like a bonfire directly in front of the tent and casting my shadow on the wall behind me. The animal kept moving back and forth on the hillside and as I suspected, was preparing for a spring upon the fragile cloth tent to pin me down. I was simply frozen to the spot with fear and I thought very fast. I knew there was nothing to defend myself with and it would be useless to break away and try to run with the snow four feet deep around me. It was a cold night, but beads of perspiration trickled down my face and I firmly believed my hair would turn white in a night, if not sooner.

Then I thought of the covered box containing our cooking utensils, in which, was a big butcher knife. Instantly, with this thought, I slipped out from under the blankets and crawled to the box. Raising the lid I plunged my hand in and was startled by the upsetting of all the tin pans and spoons, which, in falling, raised a racket like a chivari. I grabbed wildly for the knife, and in my fright must have turned for the expected attack, but the animal, alarmed by the racket, was off, and then was returning cautiously, and I had time to assume a defensive attitude. Just then it became silent. The snow was falling heavily, as I could see by the firelight from the front. The willows would now and again fall with a crash from the weight of snow and intensify the silence. As an attack did not follow at once, I crawled under the blankets, for the night was cold, and resting on my elbow with the knife grasped tightly I lay waiting. The animal was silent. It could not have retreated, else I would have heard it going. The suspense was driving me wild, but I couldn’t make a move until daylight, and so I bent my ear to every sound. But the animal remained quiet, and at last, I succumbed to the cramped position, sank down, and went to sleep. I awoke with a start at daylight and was clinching the knife with a death grip. Listening attentively, I arose and quietly unlaced the tent. The snow was four feet deep. It was some miles to the nearest camp, but I was resolved on getting there, if the Lord would permit me, and never to pass another such a night for all the silver mines in existence, even if they were all “Real Del Montes.” With utmost caution I put on my boots, buttoned my coat, grasped the knife firmly and wading into the snow around the corner of the tent, looked cautiously up on the hillside, and there, standing right over the tent, half-buried in the snow, was a — jackass. 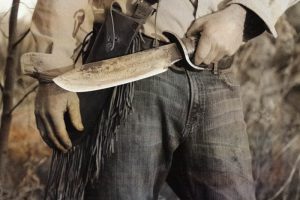 By William Daugherty, for the Reno Evening Gazette, June 13, 1891. Compiled and edited by Kathy Weiser/Legends of America, updated January 2021.