The mania for stopping trains had been equally irresistible. He would bite his lips, his fingers, but he would also stop the train.

The moment the mischief (for such it was, in nearly every instance) was done, he would suffer greatly in dread of being found out. But to-night, as on the occasion of the daylight stop in the cañon, he had no warning, no opportunity to check himself, nor any desire to do so. In each instance he had heard, dozing in the day-coach and sleeping soundly in his berth, the voice cry: “John! John!” and instantly his brain was ablaze with the light of burning wreckage. In the cañon he had only felt, indefinitely, the danger ahead; but to-night he saw the bridge swept away, and the dark gorge that yawned in front of them. Instantly upon hearing the cry that woke him, he saw it all.

“When I realized that the train was still moving, that my first effort to stop had failed, I flung these strong men from me with the greatest ease. I’m sure I should have burst those steel bands that bound my wrists if it had been necessary.

“Thank God it’s all over. I feel now that I am cured,—that I can settle down contented.”

The man drew a handkerchief from his pocket and wiped his forehead, keeping his face to the window for a long time.

When the conductor went forward, he found that it was as the porter had pictured. The high bridge had been carried away by a water-spout; and on the edge of the opening the engine trembled, her pilot pointing out over the black abyss.

McNally, having driven his fireman from the deck, stood in the cab gripping the air-lever and watching the pump. At that time we used what is technically known as “straight air”; so that if the pump stopped the air played out.

The conductor ordered the passengers to leave the train.

The rain had ceased, but the lightning was still playing about the summit of the range, and when it flashed, those who had gone forward saw McNally standing at his open window, looking as grand and heroic as the captain on the bridge of his sinking ship.

A nervous and somewhat thoughtless person came close under the cab to ask the engineer why he didn’t back up.

There was no answer. McNally thought it must be obvious to a man with the intelligence of an oyster, that to release the brakes would be to let the heavy train shove him over the bank, even if his engine had the power to back up, which she had not. 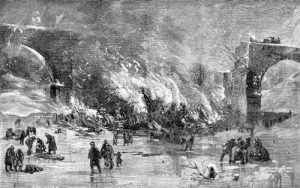 This ghostly tale, as well as dozens of others, were based on alleged hauntings that occurred after the disastrous train wreck in Ashtabula, Ohio in December, 1876. Illustration from Harper’s Weekly, January, 1877.

The trainmen were working quietly, but very effectively, unloading. The day coaches had been emptied, the hand-brakes set, and all the wheels blocked with links and pins and stones, when the link between the engine and the mail-car snapped and the engine moved forward.

McNally heard the snap and felt her going, leaped from the window, caught and held a scrub cedar that grew in a rock crevice, and saw his black steed plunge down the dark cañon, a sheer two thousand feet.

McNally had been holding her in the back motion with steam in her cylinders; and now, when she leaped out into space, her throttle flew wide, a knot in the whistle-rope caught in the throttle, opening the whistle-valve as well. Down, down she plunged,—her wheels whirling in mid-air, a solid stream of fire escaping from her quivering stack, and from her throat a shriek that almost froze the blood in the veins of the onlookers. Fainter and farther came the cry, until at last the wild waters caught her, held her, hushed her, and smothered out her life.

Compiled and edited by Kathy Weiser/Legends of America, updated April, 2017.

Author & Notes: This tale is adapted from a chapter of a book written by Cy Warman, entitled The Last Spike And Other Railroad Stories, published by Charles Scribner’s Sons, New York, 1906. The tale is not 100% verbatim, as minor grammatical errors and spelling have been corrected. At the age of five, Warman got his first job working as water boy for a railroad construction crew. When he grew up, he went to work on the Denver & Rio Grande hired him as a general labourer and by the second day he had so impressed his foreman, that he was promoted to a fireman. Three years later, he became an engineer. He soon began to write railroad poems and short stories about railroad life. Later he worked as an editor on several railway magazines, and as a railroad reporter. He contributed a number of stories to Harper’s Magazine, The Century, and McClure’s Magazine, as well as publishing several books.