Pringle, South Dakota, is a semi-ghost town in Custer County that started as a stage stop on the Sidney-Custer Trail. Operated by Henry Pringle, it was called the Point of Rocks Stage Station. 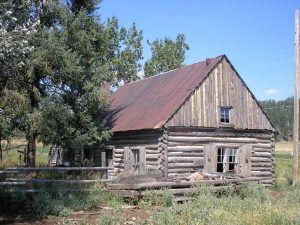 This route was an important crossing into the southern Black Hills that made its way northward from Fort Robinson, Nebraska to Buffalo Gap, where the trail split, with one leg making its way to Deadwood and the other to Custer. From Buffalo Gap, the trail snaked its way through Shirttail Canyon through Pringle and then to Custer. It also served traffic between Cheyenne, Wyoming, and Custer. During the Black Hills Gold Rush, this trail was jealously guarded by the Lakota and Cheyenne, who regularly attacked wagon trains and stagecoaches passing along the trails between 1874 and 1876. It was also the target of road agents and horse thieves, who were known to maintain their hideouts at isolated locations in the Southern Hills. 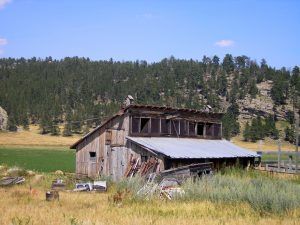 An old building in Pringle, South Dakota, by Kathy Weiser-Alexander.

A small settlement, also called Point of Rocks, soon developed around the stage station. The settlers made their livelihoods from ranching, logging, and mining. The stage station gained a post office in 1885.

In 1890, the Chicago, Burlington, and Quincey Railroad reached the settlement, at which time the town’s name was changed to Pringle. It was named after Anna Carr Pringle, who provided hospitality to the railroad crews when they came through town. The settlement soon boasted a railroad depot and two stores. 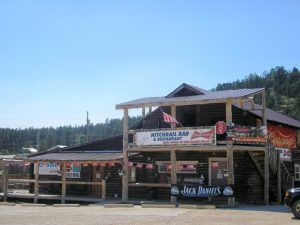 Today, there are several old buildings in Pringle, including the old Point of Rocks Stage Station. The only open businesses are the Hitch Rail Bar & Restaurant and the post office. The Hitch Rail Bar has been part of the southern Black Hills for some 60 years. Pringle is currently called home to a little more than 100 people.

Unfortunately, today Pringle is best known as the town closest to a 140-acre compound belonging to the Fundamentalist Church of Jesus Christ of Latter-Day Saints (FLDS.) The “military-style” fortress, established in 2003, is surrounded by berms and barbwire and is continuously guarded by a lookout tower. The radical, polygamist offshoot of the Mormon Church is the same group that lived outside Eldorado, Texas, when that compound was raided in 2008 over accusations of sex abuse, and Warren Jeffs was sentenced to life in prison for child sex assault. The compound near Pringle was run for years by Seth Jeffs, a brother to Warren, who was convicted of harboring a fugitive for his role in helping Warren avoid arrest and later plead guilty to food-stamp fraud. Today, the compound is under scrutiny because its residents have never complied with a state law requiring them to report all births and deaths during the many years of its operation. The site has been a source of controversy in the area since its beginning, so much so that a group of residents got together and purchased the property around it to stop the FLDS from expanding. 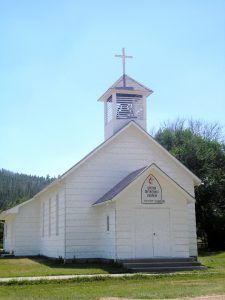 Pringle is located about 11 miles south of Custer, just north of the intersection of South Dakota Highways 385 and 89 on Highway 385.