When it was almost night, and time for the Sun to come home, the Moon hid Scarface under a pile of robes. As soon as the Sun got to the doorway he said, “A strange person is here.”

“Yes, father,” said Morning Star, “a young man has come to see you. He is a good young man, for he found some of my things in the trail and did not touch them.”

Scarface came out from under the robes and the Sun entered the lodge and sat down. He spoke to Scarface and said, “I am glad you have come to our lodge. Stay with us as long as you like. Sometimes my son is lonely. Be his friend.”

The next day the two young men were talking about going hunting and the Moon spoke to Scarface and said, “Go with my son where you like, but do not hunt near that big water. Do not let him go there. That is the home of great birds with long, sharp bills. They kill people. I have had many sons, but these birds have killed them all. Only Morning Star is left.”

Scarface stayed a long time in the Sun’s lodge, and every day went hunting with Morning Star. One day they came near the water and saw the big birds.

“Come on,” said Morning Star, “let us go and kill those birds.”

“No, no,” said Scarface, “we must not go there. Those are terrible birds; they will kill us.”

Morning Star would not listen. He ran toward the water and Scarface ran after him, for he knew that he must kill the birds and save the boy’s life. He ran ahead of Morning Star and met the birds, which were coming to fight, and killed every one of them with his spear; not one was left. The young men cut off the heads of the birds and carried them home, and when Morning Star’s mother heard what they had done, and they showed her the birds’ heads, she was glad. She cried over the two young men and called Scarface “My son,” and when the Sun came home at night she told him about it, and he too was glad. “My son,” he said to Scarface, “I will not forget what you have this day done for me. Tell me now what I can do for you; what is your trouble?”

“Alas, alas!” replied Scarface, “Pity me. I came here to ask you for that girl. I want to marry her. I asked her and she was glad, but she says that she belongs to you, and that you told her not to marry.”

“What you say is true,” replied the Sun. “I have seen the days and all that she has done. Now I give her to you. She is yours. I am glad that she has been wise, and I know that she has never done wrong. The Sun takes care of good women; they shall live a long time, and so shall their husbands and children.

“Now, soon you will go home. I wish to tell you something and you must be wise and listen. I am the only chief; everything is mine; I made the earth, the mountains, the prairies, the rivers, and the forests; I made the people and all the animals. This is why I say that I alone am chief. I can never die. It is true the winter makes me old and weak, but every summer I grow young again.

The Sun took Scarface to the edge of the sky and they looked down and saw the world. It is flat and round, and all around the edge it goes straight down. Then said the Sun, “If any man is sick or in danger his wife may promise to build me a lodge if he recovers. If the woman is good, then I shall be pleased and help the man; but if she is not good, or if she lies, then I shall be angry. You shall build the lodge like the world, round, with walls, but first you must build a sweat-lodge of one hundred sticks. It shall be arched like the sky, and one-half of it shall be painted red for me, the other half you shall paint black for the night.” He told Scarface all about making the Medicine Lodge, and when he had finished

speaking, he rubbed some medicine on the young man’s face and the scar that had been there disappeared. He gave him two raven feathers, saying: “These are a sign for the girl that I give her to you. They must always be worn by the husband of the woman who builds a Medicine Lodge.”

Now Scarface was ready to return home. The Sun and Morning Star gave him many good presents; the Moon cried and kissed him and was sorry to see him go. Then the Sun showed him the short trail. It was the Wolf Road–the Milky Way. He followed it and soon reached the ground.

It was a very hot day. All the lodge skins were raised and the people sat in the shade. There was a chief, a very generous man, who all day long was calling out for feasts, and people kept coming to his lodge to eat and smoke with him. Early in the morning this chief saw sitting on a butte near by a person close-wrapped in his robe. All day long this person sat there and did not move. When it was almost night the chief said, “That person has sat there all day in the strong heat, and he has not eaten nor drunk. Perhaps he is a stranger. Go and ask him to come to my lodge.”

Some young men ran up to the person and said to him, “Why have you sat here all day in the great heat? Come to the shade of the lodges.

The chief asks you to eat with him.” The person rose and threw off his robe and the young men were surprised. He wore fine clothing; his bow, shield, and other weapons were of strange make; but they knew his face, although the scar was gone, and they ran ahead, shouting, “The Scarface poor young man has come. He is poor no longer. The scar on his face is gone.”

All the people hurried out to see him and to ask him questions. “Where did you get all these fine things?” He did not answer. There in the crowd stood that young woman, and, taking the two raven feathers from his head, he gave them to her and said, “The trail was long and I nearly died, but by those helpers I found his lodge. He is glad. He sends these feathers to you. They are the sign.”

Great was her gladness then. They were married and made the first Medicine Lodge, as the Sun had said. The Sun was glad. He gave them great age. They were never sick. When they were very old, one morning their children called to them, “Awake, rise and eat.” They did not move.

In the night, together, in sleep, without pain, their shadows had departed to the Sandhills 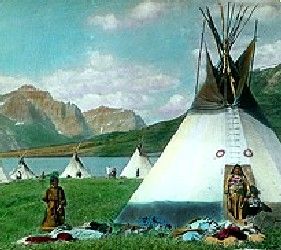 Blackfoot Indians Storieswas published by George Bird Grinnell in 1913 and is now in the public domain. George Bird Grinnell studied at Yale with an intense desire to be a naturalist. He talked his way onto a fossil collecting expedition in 1870, and then served as the naturalist on Custer’s expedition to the Black Hills in 1874. Grinnell was interested in what he could learn from the Indian tribes of the region, and early on, was well known for his ability to get along with Indian elders. The Pawnee called him White Wolf, and eventually adopted him into the tribe. Grinnell was also editor of Forest and Stream, the leading natural history magazine in North America, the founder of the Audubon Society and the Boone and Crockett Club, and an advisor to Theodore Roosevelt. Glacier National Park came about largely through his efforts. Grinnell also spent significant time working for fair and reasonable treaties with Native American tribes, and for the preservation of America’s wild lands and resources.