More and more as time passed, this naturally brave and ambitious man became prey to the selfish interests of the traders and politicians. The immediate causes of the Sioux outbreak of 1862 came in quick succession to inflame to desperate action an outraged people. The two bands on the so-called “lower reservations” in Minnesota were Indians for whom nature had provided most abundantly in their free existence. After one hundred and fifty years of friendly intercourse first with the French, then the English, and finally the Americans, they found themselves cut off from every natural resource, on a tract of land twenty miles by thirty, which to them was virtual imprisonment. By treaty stipulation with the government, they were to be fed and clothed, houses were to be built for them, the men taught agriculture, and schools provided for the children. In addition to this, a trust fund of a million and a half was to be set aside for them, at five percent interest, the interest to be paid annually per capita. They had signed the treaty under pressure, believing in these promises on the faith of a great nation.

However, on entering the new life, the resources so rosily described to them failed to materialize. Many families faced starvation every winter, their only support the store of the Indian trader, who was baiting his trap for their destruction. Very gradually they awoke to the facts.

At last, it was planned to secure from them the north half of their reservation for $98,000, but it was not explained to the Indians that the traders were to receive all the money. They made the greatest mistake of his life when he signed this agreement.

Meanwhile, to make matters worse, the cash annuities were not paid for nearly two years as the Civil War had begun. When it was learned that the traders had taken all of the money  “on account”, there was a very bitter feeling. In fact, the heads of the leading stores were afraid to go about as usual, and most of them stayed in St. Paul. Little Crow was justly held in part responsible for the deceit, and his life was not safe.

The murder of a white family near Acton, Minnesota, by a party of Indian duck hunters in August 1862, precipitated the break. Messengers were sent to every village with the news, and at the villages of Little Crow and Little Six the war council was red-hot. It was proposed to take advantage of the fact that the north and south were at war to wipe out the white settlers and to regain their freedom. A few men stood out against such a desperate step, but the conflagration had gone beyond their control.

There were many mixed bloods among these Sioux, and some of the Indians held that these were accomplices of the white people in robbing them of their possessions, therefore their lives should not be spared. My father, Many Lightnings, who was practically the leader of the Mankato band (for Mankato, the chief, was a weak man), fought desperately for the lives of the half-breeds and the missionaries. The chiefs had great confidence in my father, yet they would not commit themselves since their braves were clamoring for blood. Little Crow had been accused of all the misfortunes of his tribe, and he now hoped by leading them against the whites to regain his prestige with his people, and a part at least of their lost domain.

There were moments when the pacifists were in grave peril. It was almost daybreak when my father saw that the approaching calamity could not be prevented. He and two others said to Little Crow: “If you want war, you must personally lead your men tomorrow. We will not murder women and children, but we will fight the soldiers when they come.” They then left the council and hastened to warn my brother-in-law, Faribault, and others who were in danger.

Little Crow declared he would be seen in the front of every battle, and it is true that he was foremost in all the succeeding bloodshed, urging his warriors to spare none. He ordered his war leader, Many Hail, to fire the first shot, killing the trader James Lynd, in the door of his store.

After a year of fighting in which he had met with defeat, the discredited chief retreated to Fort Garry, now Winnipeg, Manitoba, where, together with Standing Buffalo, he undertook secret negotiations with his old friends the Indian traders. There was now a price upon his head, but he planned to reach St. Paul undetected and there surrender himself to his friends, who he hoped would protect him in return for past favors. It is true that he had helped them to secure perhaps the finest country held by any Indian nation for a mere song.

He left Canada with a few trusted friends, including his youngest and favorite son. When within two or three days’ journey of St. Paul, he told the others to return, keeping with him only his son, Wowinape, who was but 15 years of age. He meant to steal into the city by night and go straight to Governor Ramsey, who was his personal friend. He was very hungry and was obliged to keep to the shelter of the deep woods. The next morning, as he was picking and eating wild raspberries, he was seen by a wood-chopper named Lamson. The man did not know who he was. He only knew that he was an Indian, and that was enough for him, so he lifted his rifle to his shoulder and fired, then ran at his best pace. The brilliant but misguided chief, who had made that part of the country unsafe for any white man to live in, sank to the ground and died without a struggle. The boy took his father’s gun and made some effort to find the assassin, but as he did not even know in which direction to look for him, he soon gave up the attempt and went back to his friends.

Meanwhile, Lamson reached home breathless and made his report. The body of the chief was found and identified, in part by the twice-broken arm.

By Charles A. Eastman, 1918. Compiled and edited by Kathy Weiser/Legends of America, updated November 2019. 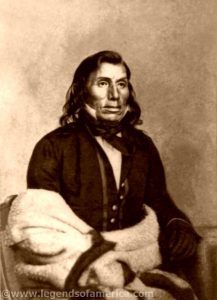 About the Author: Excerpted from the book Indian Heroes and Great Chieftains, by Charles A. Eastman, 1918. Charles A. Eastman earned a medical degree from Boston University School of Medicine in 1890 and then began working for the Office of Indian Affairs later that year. He worked at the Pine Ridge Agency, South Dakota, and was an eyewitness to both events leading up to and following the Wounded Knee Massacre on December 29, 1890. Himself part-Sioux, he knew many of the people about whom he wrote.