Momo is a large Bigfoot-like creature that began to be sighted near Louisiana, Missouri in July 1972. 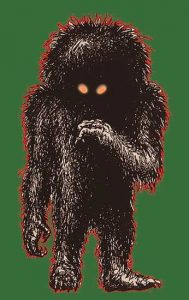 Momo, short for “Missouri Monster”, was reported to have a large pumpkin-shaped head with black furry hair covering its body, and so much fur on its head, that its face couldn’t be seen with the exception of glowing orange eyes. This 7-foot-tall, hairy beast was first seen on the edge of the woods just outside of town by two young boys and their sister. These kids also said that the creature smelled terrible and was carrying a bloody dead dog.

Following the childrens’ first sighting of Momo, more people reported having seen the beast in the weeks that followed. Reports stated that it was seen up and down the Mississippi River with later sightings occurring further west along on other waterways. Others reported having caught fleeting glimpses of something in the woods while some said they smelled something beastly or heard haunting cries, growls similar to a bear’s, and inhuman screams.

One of the witnesses was Richard Alan Murry, a lifelong local who had served as the town’s fire chief and sat on the city council. He reported that when he was driving along a small creek that runs through the middle of the town, he saw something moving in the woods. When his headlights fell on the upright figure, the creature quickly ran away and disappeared. He later stated “I was amazed to see something. I thought it was a bunch of nonsense, but then I saw something.” 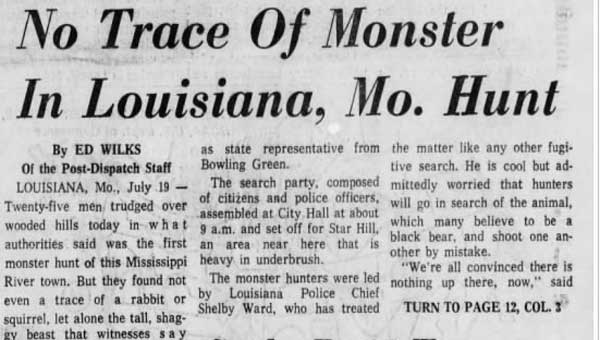 Before long, the news media picked up the story, attracting curiosity seekers and monster hunters from around the country. At one point, a 20-person posse was put together to kill the beast, but the creature was never found.

Tracks were found and submitted to Lawrence Curtis, director of the Oklahoma City Zoo who deemed the tracks to be that of an unknown primate species.

After a rash of early sightings, the encounters occurred less and less over the next few years, before they stopped altogether.

Listverse
Only In Your State
Vice.com
Wikipedia