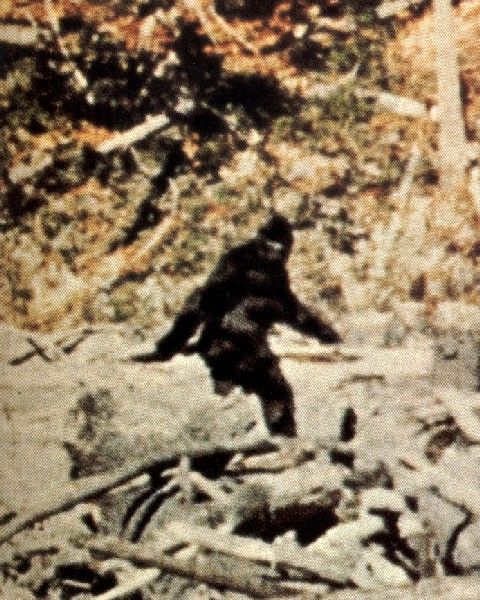 A frame from October 20, 1967, Patterson-Gimlin film shot in California, claiming to depict Bigfoot.

Bigfoot has been sighted throughout the United States from the 16th Century to the present. The first reported sightings were by Native Americans. It was called numerous names by different Indian tribes, and “Sasquatch” was only one of over 50 names given to the creature. Looking more like a hairy man than an ape or monkey, it is mostly reported as 6 – 8 feet tall but has been sighted with a smaller female and/or offspring. The larger adult male of the species is rugged and built very muscular. Its shoulders are wide, and it has very little neck area. It has short brown to black hair covering its body, with longer hair on the head. Most reports have the creature’s eyes glowing or shining red in the dark when reflected by a flashlight or some other light source.

Most folks report no odor when encountering Bigfoot, but of those that do, it appears to display a strange anomaly of projecting or discharging a scent at will.

People sometimes report one smell, then suddenly, it changes into an entirely different odor. Odors have been described as rotten flesh, poop, old vomit, outhouses, rotted fish, rotten eggs, or foul and just sickening. Bigfoot seems to make Ape-like grunts and growls to almost a scream-like sound, and others have heard whistles and strange calls.

Indians almost all believe Bigfoot is a non-physical creature. Some Indian tribes mention that they have seen the creature transform into a wolf. Others think these creatures live in another dimension from the physical plane but can come here as they desire. Some also believe Bigfoot has great psychic abilities. Reports of sightings show the creature can be visible to some people while at the same time remaining invisible to others in the same group. There are many reports from non-Indians who saw the creature after a UFO sighting. And others that have searched for and researched Bigfoot for years are coming to the conclusion that the creature is a spiritual being because he can appear or disappear at will.

Great Lakes Indians mention that if one is walking in the woods and you hear the sound of a stick being hit against a hollow log or tree, beware, for this area is Sasquatch territory. This seems to be an interesting thing to note because other non-Indians have even reported this. People have reported that sometimes the stick hitting is loud or thud like a large log is being hit against a tree, while at other times, it is more like a small stick is being used.

The creatures’ episodes of hitting sticks and rock-throwing may be the best evidence we have to show that they are spiritual beings. Suppose you research paranormal cases involving “poltergeist” incidents. In that case, you will soon realize that many cases involve throwing or dropping stones against houses and on the roofs of the homes where the poltergeist attacks occur. In many poltergeist cases, the stones being dropped and thrown were the beginning of the infestation, or encounter, just like in the Bigfoot cases. 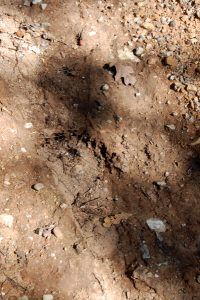 Bigfoot print at For Washita, Oklahoma. 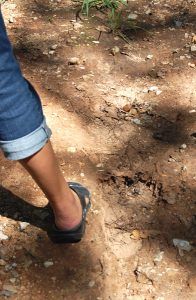 Bigfoot print at For Washita, Oklahoma.

What do you think?: On a trip to Fort Washita, Oklahoma, we ran into some tracks that we wondered if they might just be from the big hairy creature himself. Check them out and tells us what you think. — Kathy Alexander