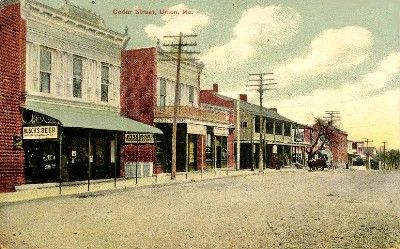 Do you believe in ghosts? I use to be like many of you. I was a true skeptic. A true disbeliever. That was me until three years ago. Now I do believe. I wish I didn’t. It would be easier for me to sleep at night. Even now, three years later, I am still woke up in the night by the memory of the screaming man, the child in pain, and the dark ghostly image that turned my world upside down and changed my beliefs forever. I do believe in ghosts.

It was in May 2001. I needed desperately to find a place for myself and three children to live in Union, Missouri. Our lease was up at the apartment where we had lived for two years. I was a single father, and I was about to find myself and my children homeless. Like many, I had answered just about every ad in the newspaper for rentals. One evening I received a call from this woman telling me about this house. She said it was a rather large old house that was in very good shape. She invited me to an open house which was to be held that coming Sunday. Sunday rolled around. You can’t imagine the surprise when my daughter and I rolled up in front of this large old white house. We walked in. The smell of cookies baking hit us immediately upon entering through the front door. To our surprise, we were standing in a living room with cherubs surrounding the top of the walls all the way around the room. All of the original woodwork was intact and a large wooden pole ran to the ceiling creating a divider which separated the living room from the family room. The house had two floors with three bedrooms, and a large family kitchen with a mudroom that lead to the back door. The upstairs bedrooms had a breezeway that could be accessed from all rooms.

The basement had an old butcher’s shower and a fruit cellar. It was more house than we ever imagined for the price and immediately made up our minds that we had to have it. Anyone who has lived in an apartment for two years with three children would understand our desperation. We had to have this house.

We spoke with the landlady and she gave me an application to fill out. There were many people there looking at the house so we knew we would have to compete to be its tenants. I handed my application to the landlady. “You understand the responsibility that comes with living in an old house such as this?” she asked. “Oh, yes I understand. It’s beautiful.”, I quickly replied, not really understanding to what I was agreeing to. “Well then I will get back to you,” she quickly retorted and was off to peddle her wares to another of the visiting house hunters. She was a strange old lady and the way she showed the house wasn’t in a real estate type manner. She showed the house as if she were showing a museum. We felt like we were on one of the house tours often given each year for charity.

A week went by before the phone rang one evening. It was the strange landlady overly excited to tell me that she had selected me, my daughter and two sons to live in the old house. I was to meet her that following day at a restaurant to settle all of the paperwork and payment. I thought this was a little strange and I was a little disappointed because I couldn’t wait to see the house that would now become our home.  The papers were signed on the following day. That weekend was Memorial weekend and we were all set to move in.

It seemed like years before Friday came that week, but we were finally there. Moving day. The move was a normal one and before we knew it all of our belongings were hidden safely inside the old white house. I was removing the last few items from the moving truck when a car slowed down, almost stopping in front of our new home. From the window of the slow-moving car, the passenger said, “Hope you get along okay here,” and then sped up and drove away. “What do you think of that dad,” my puzzled daughter asked. “Friendly neighbors I suppose,” I replied as I shut the sliding door to the truck.

The first night in the house went by without fanfare. Maybe because we were so tired from the move or perhaps because the house wanted to draw us in a little closer before beginning its series of attacks and assaults upon me and my family. The next morning started like most any other day. Except I did notice one strange thing about the house. Each of the houses’ interior doors had an old fashioned hook and eye latch, but not on the inside of each rooms doors to keep someone out. The latches were on the outside of the rooms doors, as if to keep something in. “What is it dad?” my youngest son asked from behind. “Oh nothing,” I replied and went about the business of unpacking our things.

The first incident happened in the living room when I was hanging a large picture of two angels. My daughter thought that this would complement the cherubs that surrounded the room. I hung the picture and turned to walk away. Crash! I turned to see that the picture had fallen to the floor. Re-hanging the picture once again, I turned away. Crash! The picture was once again on the floor. Hanging it for a third time, when I started walking away I felt a rush of air and something hit the back of my ankles. “What the hell…?” I turned to see the picture lying at my feet. More determined than ever, I hung the picture again and stated loudly, “Stay there dammit.” I had to laugh because I was alone. Who did I think I was talking to? The kids were playing on the front porch.

“Dad come and see this,” my daughter’s voice rang through the front door. I stepped out onto the porch. “Sit down and watch this,” she said excitedly. “Watch what?” I replied. No sooner were the words out of my mouth when my daughter pointed to an old man walking down the sidewalk toward our house. However, when he reached our property line he quickly crossed the street and continued his walk on the opposite sidewalk. “They don’t like walking in front of our house dad. Isn’t that weird?” my daughter, breathless with excitement stated. And right she was. I sat on that porch for a good three hours watching our neighbors cross the street away from our house any time they walked along our street. A couple of times I motioned as if to say hello, but they just dropped their heads and continued on their way at a brisker pace.  “Maybe they are uncomfortable with new neighbors?” I rationalized trying to make sense out of the senseless situation. We went inside for dinner and the rest of the night went normally without incident.

Sunday. The kids came home from church excited because we had set aside the whole day to work on our yard. This was a big deal for us because the only outside area our apartment provided was a front balcony. We mowed the grass and cleaned out the leaves from under the porch and in the front yard. Strangely enough, the trees seemed to be shedding their leaves as if it were Fall. Strange tree behavior, I thought, and made a mental note to mention it to the landlady when I talked with her next. I asked my youngest son to go inside and bring out the garden hose from the basement so we could clean off the walkways and wash down the weathered white of the house.

A few moments passed when I heard him screaming from inside the house. Running frantically into the house, I found him standing in the kitchen shaking, in the middle of a  puddle of urine. “What’s wrong? What happened?” Looking at me with the scared eyes of a child, he said, “Something chased me up the basement steps.” “What chased you?” I asked, already thinking the overactive imagination of a little boy was at play here. “I don’t know daddy, but it was big.” Me and my other two children checked the basement but found nothing except for the garden hose that had been dropped during his frightened escape. “Let’s get you cleaned up,” I said. Naturally, there was teasing from my other two children about the proverbial basement monster. “Better watch out when you go into the basement because…” The glare of my eye finished my middle boy’s sentence. The rest of Sunday and Monday went without any other incidents and we were so happy those first few days in the house. My daughter was making plans about gardens, decorating, and my boys thought it would be easy to walk to their baseball games because the park was very close. It was a normal, happy time which, unfortunately, did not last for long.

6 thoughts on “The Union, Missouri Haunting”