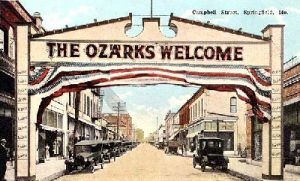 Long before the City of Springfield, Missouri was founded in 1833, the area was populated by Native Americans, who thrived on its rich resources. However, nine years after Missouri became a state in 1821, the U.S. Government forced the removal of the Indians to a reservation in Kansas and Greene County was opened for settlement, bringing in numerous white settlers who also enjoyed the areas rich resources. Years after the establishment of the city, the  Butterfield Stage Coach line which brought even more people to the area and the town quickly began to grow.

Though war-torn during the Civil War years, Springfield survived to welcome Route 66 travelers in the 20th century, and eventually to become Missouri’s third largest city. With its long and rich history, spanning Old West pioneers through modern civilization, it should come as no surprise, that it is one of the Show-Me-State’s most haunted cities. 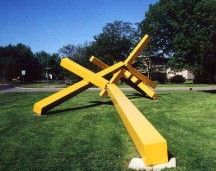 Phelps Grove Park  – On East Bennett Street, Phelps Grove Park encompasses some 44 acres that provide entertainment and beauty to area residents. It’s also allegedly home to a wandering spirit. though the park is quite old, the spirit is relatively new, evidently killed in an automobile accident. It was the day of her wedding and as she and her new groom drove through the park, the automobile went out of control and they were both killed. The “Bride under the Bridge” has often been spied near the third bridge in the park in the evening. The forlorn bride is usually seen standing, holding up the hem of her gown, but where her face should be, there is only darkness.

Bass Country Inn – A ghost known as Carl, who was a former busboy at this inn, is said to still haunt the premises. Staff have reported seeing him in the kitchen and in the halls.  Others have reported seeing a pair of legs beneath a table, but when they crouch down, there is no one there. Carl has often been reported as having been seen just out of the corner of an eye disappearing into the office or down the hall, but upon closer inspection, no one is there. Carl is seemingly harmless, but others have reported another female spirit at the Inn, who isn’t very friendly. Both apparitions have been said to touch people.  The Bass Country Inn is located off Highway 44 at North Glenstone Avenue. 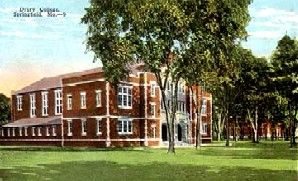 Drury University – This old institution first opened its doors on September 25, 1873, with thirty-nine pupils in attendance. Beginning with a two-story brick structure at a cost of just $7,000 for classes, the campus occupied less than 1½ acres.

Next, a frame building was built for the music department and in 1875 an elegant brick structure was opened called “Walter Fairbank’s Hall” as a women’s boarding house. Twenty-five years later the 40-acre campus included Stone Chapel, the President’s House and three academic buildings. Today the 80-acre campus still includes the original site and much more, including a few phantom visitors according to its staff and students.

Old colleges often have many reports of hauntings, but this particular college has good reason as it was built upon a site which was once Indian burial grounds and later was in the midst of the Civil War. In 1966 Smith Hall, a women’s dormitory was built in an area that used to be called home to several old Victorian houses. In one of these old vintage homes once lived a little girl who was caught in a fire when she wanted to retrieve her teddy bear.

According to the stories, she continues to linger in the hall searching for her teddy bear. Many have witnessed the little girl, dressed in pink, and walking the halls. Others have reportedly taken pictures. A bit of a prankster, students have often returned to their rooms to find their locked doors standing wide open, drawers pulled out of dressers and a teddy bear sitting in the center of the room. Others report that if they have a teddy bear, it will often be moved during the night to appear at a different place in the room the next morning. One student tells a story of an unused telephone stored in a closet that would ring during the night with no source of power.

At Clara Thompson Hall, many students have reported that pianos seemingly play by themselves and doors are said to often close on their own. At the Wilhoit Theatre, many people have reported seeing flickering lights at night when no one is in the theatre.

Southwest Missouri State University – At the Freudenberger House, which is familiarly known as the Freddy House by the students, a female phantom is said to haunt the building. The five-story residence hall houses the Military Science Department as well as playing home to over 700 students. Built in 1959, the hall was named for Norman Freudenberger, professor of Latin for 45 years. According to the legends, the matronly ghost is referred to as the Dorm Mom and seemingly has an interest in the fifth floor, where she is most often glimpsed. Freudenberger House is located at 1000 E. Madison Street. 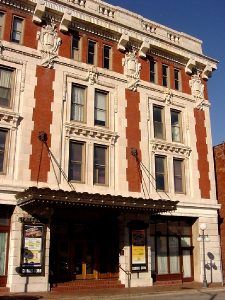 Landers Theater – Built in 1909, this four-story brick and terra cotta building has been in continuous use since its inception.  Once playing host to such artists as Lillian Russell, John Philip Sousa, Lon Chaney and Fanny Brice, it later became a motion picture house — one of the first to acquire “talkies.”

In 1977, it was placed on the National Register of Historic Places and in the 1980s the theatre underwent major renovations to return it to its early 1900s elegance.  Today the theatre continues to entertain southwest Missouri with plays, musicals, ballet, symphony and more.

But in addition to its many visitors who come for the entertainment, this old “playhouse” is also called home to several restless spirits.  The one most often seen is that of a janitor who died during a fire in the theatre in the early twentieth century.  On December 17, 1920, the Landers Theatre suffered a major fire, taking the life of the janitor and effectively closing the theatre for some time.  Only an asbestos curtain and other fireproofing precautions kept the theater from being a total loss.  According to reports, the old janitor is often seen up in the balcony by actors on the stage.

There is another story of a baby that was accidentally dropped from the upper balcony on a night long ago. Today, when actors are practicing on stage they often say that the baby repeats its fall over and over again.  Others have heard the baby crying, followed by comforting words from its ghostly mother. 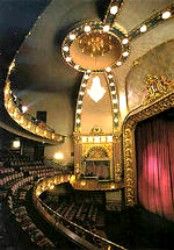 Another apparition, only seen from outside the theatre, is said to peek from a fourth-floor window at passersby along the street.  Described as tall with long blonde hair and wearing Elizabethan clothing, this spirit has never been seen inside the theatre.

Strange occurrences at the theatre include unplugged spotlights that seemingly turn on and off of their own accord, people who sense that they are being followed, taps felt on people’s shoulders by unknown entities, and apparitions glimpsed throughout the building.

The theatre is located at 311 E. Walnut.

Reader Update:  The beautiful Lander Theater in Springfield, Missouri has two more ghosts to report. Having personally seen or heard all but the actor on the fourth floor, I’d like to see the other two added to your piece about the theater. One is called the Green Orb — it is about five feet tall and very bright. I have seen it on the landing of the west stairs between the first and second balcony. The second addition is the scariest thing I’ve ever seen. It is called the Black Void. As with the Green Orb, the Black Void can be seen anywhere in the building. One night as I was going to work backstage, I passed through the very tight alley on the west side to the backstage door. Suddenly, I  felt a little uneasy and stopped to look around, but didn’t see anything.  However, when I looked up to the fire escapes, I saw the Black Void between the first and second balcony exits.  It looked like a big black hole and the red brick of the building was just gone!  The Void had replaced it with a BIG jet black spot that looked as if you could walk right through it. Needless to say, I quickly ran inside!!  – R. Vestal, October 2004

Springfield National Cemetery –  This old cemetery was established in the 1860s and holds the remains of several Civil War soldiers, some of which are apparently restless. Visitors to the cemetery have reported seeing glowing gravestones in the night and several others have walked away with photographs that include strange apparition appearing subjects and dozens of orbs.  The cemetery is located at 1702 East Seminole Street in downtown Springfield at the cross street of Glenstone Avenue (US 65).

University Plaza Hotel – Unlike many quaint inns and motels, the Plaza Hotel is not proud of its resident ghost.  Touting itself as Springfield’s premier meeting place and convention center, it fears that knowledge of the spirit will hurt its business.  However, “The Colonel,” as he has become known, has been seen by most everyone who works at the Convention Center.  The towering hotel is built upon land that was once a large plantation belonging to a well-decorated Civil War hero.  This older gentleman, dressed all in black is most often seen between midnight and 4:00 a.m. in the ballroom and in the back hallways of the hotel.  The University Plaza Hotel is located at South John Q. Hammons Pkwy at the cross street of East Saint Louis Street.

Reader Update:  I read with interest regarding the decorated Civil War hero who supposedly haunts our hotel.  It almost has to be John Polk Campbell who at one time owned almost all the land in what is now Springfield, Missouri.  Thought you might like to have a name for this man. – Mary, Springfield, Missouri, December 2004.

Reader Update #2:   I have done further research into the founding fathers of Springfield, and I now believe the ghost in the University Plaza Hotel is instead, John S. Phelps, who was a very much decorated Civil War veteran.  Sorry for the earlier conjecture.  Will try to research further.  Mary, Springfield, Missouri, January 2005.

Is it not wonderful that 5,000 years have now elapsed since the creation of the world, and still it is undecided, whether or not there has even been an instance of the spirit of any person appearing after death? All argument is against it, but all belief is for it.

Springfield – Queen City of the Ozarks