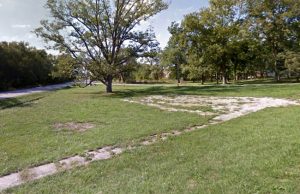 Before European settlement, this area was utilized by Osage Indians who traveled along a trail that made its way to present-day Utica, Missouri before crossing the Grand River, and on toward Iowa. In the immediate vicinity of what would become Lock Springs, there were three springs bubbling from the hillsides, and the Indians not only utilized these springs as a watering-place, but also camped, and buried their dead here.

In 1839, a man John D. Lock received a government land grant of 320 acres. As more people came through the area, many travelers sought at the site of the springs for its water and it became known as Mr. Lock’s springs.

In 1843, Lock was granted a patent for the land by President John Tyler, and he soon surveyed and platted a townsite. However, little appears to have done about developing a town at that time. 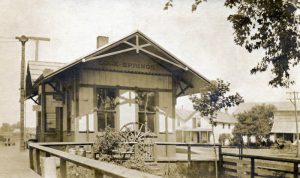 When John Lock died in 1869, his property was divided and sold to Joseph Offield and Nathaniel Houston. That year Nathaniel and Rachael Houston were paid $1 by the Chillicothe and Omaha Railroad Company for use of a right-of-way on their property.

In 1870, there was a small village located several miles to the northeast, comprised of three houses and a small store, called “Old Greasy,” due to its location on a treacherous hill road. That year, the four buildings were moved to Houston’s land near the springs. A post office was established in 1871 and the next year, Houston platted 14 blocks for an official town. The first home was built by the McFarlins.

By 1880, the village was called home to about 50 people and one historian mentioned it as “not of very great proportions but like all rising towns, they believe immensely in their future.” At that time, Lock Springs boasted the St. Louis & Omaha Railroad station and depot building, a druggist, a grocery store, a general merchandise store, and a blacksmith. A decade later, the town would be called home to 212 people. 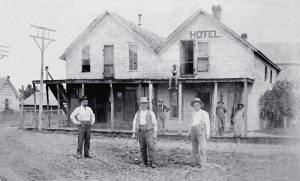 In 1897, a two-room schoolhouse was built that served the 1st through 8th grades. At some point the Moore Hotel was built, which was also known as the Railroad Hotel because it was near the depot. In 1898, it was purchased by Henry Eugene “Doc” Moore.

By 1900, the town was called home to 246 people and it soon boasted two hotels, a blacksmith shop, a lumber yard, drug store, a dry goods store that had the only public telephone, a grocery, a stove bolt factory, an ax handle, barrel, and stave factory; and a newspaper. North of town, there was a cheese factory, run by Henry and Martha Baker.

In 1914, Homer Moore and his wife Maybelle took over the operation of the Moore Hotel from his father. It continued operations until 1932.

Lock Springs reached its peak population of 288 in 1920 and afterward, gradually declined.

In 1938, the first school was torn down and a new school was built. In 1955, the area schools were consolidated and Lock Springs students began to attend school in Jamesport, about nine miles to the north. Today the old school serves as a private residence. 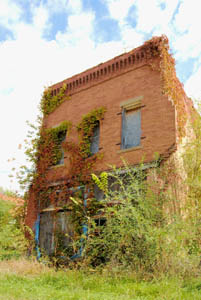 This Kadzu covered building in Lock Springs, Missouri appears to be gone today by Kathy Weiser-Alexander.

Today, this semi-ghost town appears to have no open businesses except the grain elevator and is called home to about 55 area residents. 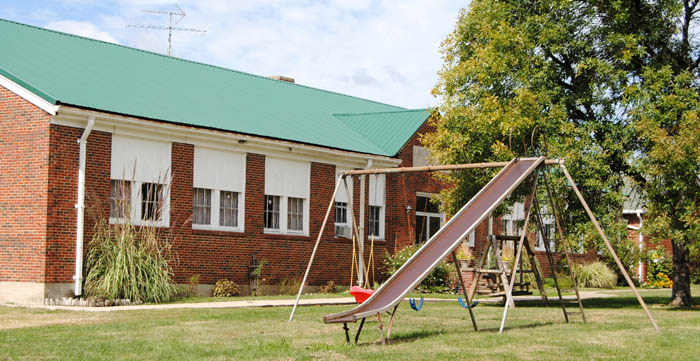 The former school building in Lock Springs, Missouri appears to be utilized as a residence today by Kathy Weiser-Alexander.