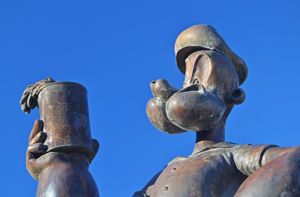 Alma, Arkansas is the self-proclaimed Spinach Capital of the World and commemorates this by painting its water tower to be the “world’s biggest can of spinach.”

This company town for Popeye Brand Spinach also celebrates its heritage with an annual Spinach Festival each April that includes arts and crafts, food vendors, a car show, entertainment, and a Spinach Festival Talent Show.

Continuing with the theme, an eight-foot statue of Popeye sits in front of City Hall, but evidently, not everyone on Alma is a hero like Popeye, cuz’ the larger than life sailor man was stolen here a few years back. But, alas, the spinach obsessed character was found dumpster-diving at Walmart just a few days later and has since returned to his perch.

If spinach is your bag (or can, should we say), Alma also offers outdoor enthusiasts, opportunities to hike, bike, fish, camp, hunt and canoe at nearby White Rock Mountain Recreation Area, Lake Fort Smith State Park, and Ozark Highlands Trail. 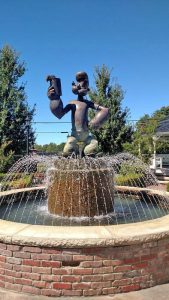 The town is located on two major interstates, I-40 and I-540, and U.S. 71, which is part of the Boston Mountain Scenic Loop. Alma is located in the Arkansas River Valley about 15 miles from Fort Smith and at the foothills of the Ozark Mountains and Fayetteville, which is about 45 miles away.

This small town is called home about 5,900 people.