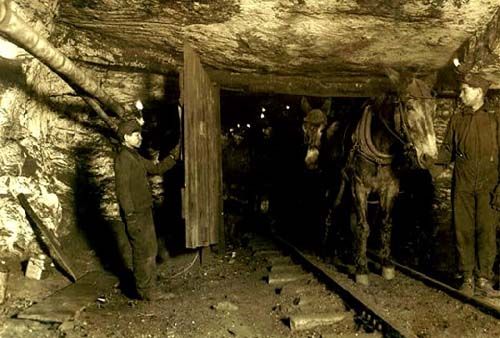 Mining is an ancient profession, and along with the back-breaking work and dangers of working in the dark underground comes century-old superstitions, the most notable being that of the Tommyknockers.

These impish, gnome-like men are the Cornish equivalent of Irish leprechauns and English brownies. Germans called them Berggeister or Bergmännlein, meaning “mountain ghosts” or “little miners.”

The Cornish believed these wee little men were the souls of the Jews who crucified Christ and were sent by the Romans to work as slaves in the tin mines. This belief was so strong that the Tommyknockers were allegedly never heard on Saturdays, nor at times of Jewish festivals. 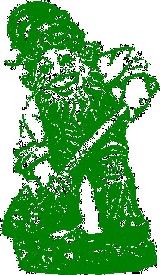 They are about two feet tall and often described as greenish in color. They look like men and are most often spied wearing a traditional miner’s outfit. Living beneath the ground, they have been “known” to have committed both good and bad deeds through the centuries, often playing practical jokes and committing random acts of mischief, such as stealing unattended tools and food.

The Tommyknockers were first heard of in the United States when Cornish miners worked in the western Pennsylvania coal mines in the 1820s. When the California Gold Rush began, these experienced Cornish miners were welcomed and often sought after by the mine owners. Attempting to recruit more minders, managers often approached the immigrants, asking if they had relatives back in England who might come to work the mines. The Cornish miners would reply something like this: “Well, me cousin Jack over in Cornwall wouldst come could ye pay’ is boat ride.” Soon, these many immigrant miners took on the nickname Cousin Jacks, who formed the core of America’s early western mining workforce. As such, their superstition of the Tommyknocker thrived and spread throughout the mines of the west.

The name “knockers,” pronounced “knackers,” comes from the knocking on the mine walls that often happens just before cave-ins. Caused by the creaking of earth and timbers, some thought these sounds of “hammering” were malevolent, indicating certain death or injury. Others saw their “knocking” as well-meaning, warning the miners that a life-threatening collapse was imminent. Yet, others believed that the knocking sounds would lead them to a rich ore body and or signs of good luck.

When these grizzled little gnomes were good, they were thought to bring miners favors and wealth. But when they were bad, they were said to bring about misery, injury, and death to those who doubted their power or did not believe in them.

These highly animated characters were also known to perform many of the mining duties, working right alongside the men, being blamed for many a prank, and is credited with saving the lives of many miners. If a hammer was missing, it was the Tommyknockers who had taken it, but if a miner escaped a collapse, the Tommyknockers were given credit.

Later, the legend of the Tommyknockers evolved into the idea that the knockings were caused by dead miners who were kind enough to give warnings of danger to the living. In praise of these kind gestures, the miners would leave food and other items to secure their good graces and protection.

In some mines, where the Tommyknockers’ presence was known to be overwhelmingly malevolent, the mines were forced to close because of the mens’ fear of the spirits. When the mines played out, the legend continued, as many said the Tommyknockers found “work” in the homes surrounding the old mineshafts. Superstitions continued when many a family death or disaster was allegedly foretold by a knocking in the house.

Belief in these diminutive miners remained well into the 20th century until modern systems and education replaced these earlier superstitions. Though not much is heard of the Tommyknockers today, they will forever have a place in our history, legend, and lore.

“My father grew up in a mining camp, Confidence, California. His father worked at the Confidence mine. Father’s stories of those times included the tommyknockers. Your recital is right on. My father said his mother would bake a saffron cake for his father to take with him. When the miners (the cousin Jacks) finished their day, they always left some saffron cake for the tommyknockers. To not do so was very bad luck.

I grew up in Ohio, and when my grandmother came to visit, she baked a small saffron cake for us.”