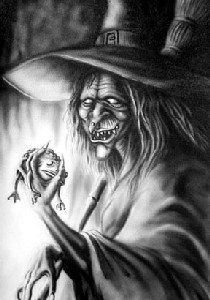 Long ago during the late 1950s, my family lived in a small town called Seville, located some forty miles west of Sequoia National Park in California.  The town had been booming, with a Railroad running through it, but had long since burned down leaving only small shacks for homes.  We were a hard-working migrant family and settled in Seville to pick cotton and grapes.

Soon after we arrived, we were told by several local families that, in addition to the few migrant families living in the shack homes, Seville was also called home to several local witches.  According to our neighbors, these Las Brujas would appear on the first full moon of the month to fight with each other to see who had the most power.

On the night of the first full moon, we could hear our neighbors, the Vecinos, outside talking about the witches.  Soon, we gathered up and joined them, fully anticipating to see some ugly women fighting.  We waited and watched late into the night without seeing anything when suddenly two balls of fire appeared high up in the air.  Standing between my mother’s legs, I watched in awe as the two burning flames bounced back and forth across the sky, often colliding with each other.  We were told by the neighbors that the blazing orbs would continue to do battle until one of the witches would exhaust its power and fall from the sky.

I became frightened and prayed the witches would keep their distance. Finally, when my fear overwhelmed me, I begged my mother to take me inside the house, not staying to watch the dying ember fall from the night above.

I have never since experienced this incident again, but I have been told that practice continues to exist in places that witches make their home.

This is not a folklore story but a factual story.