Could we but mould our dreams at will,
And keep them free from harm or ill,
How pleasant it would be,
To deem our waking hours but dreams,
And that, our life which now but seems
A baseless fantasy. 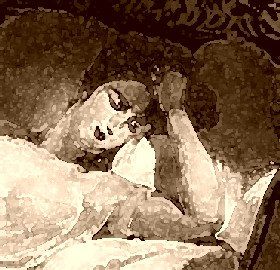 Here are the meanings of ten common dreams that people have:

Being Chased or Attacked

To dream that you engage in a fight denotes that you will have unpleasant encounters with your business opponents, and lawsuits threaten you.

To see fighting denotes that you are squandering your time and money. For women, this dream is a warning against slander and gossip.

For a young woman to see her lover fighting, is a sign of his unworthiness. To dream that you are defeated in a fight signifies that you will lose your right to property.

To whip your assailant denotes that you will, by courage and perseverance, win honor and wealth in spite of opposition.

To dream that you see two men fighting with pistols, denotes many worries and perplexities, while no real loss is involved in the dream, yet but small profit is predicted and some unpleasantness is denoted.

To dream of the wind blowing softly and sadly upon you, signifies that great fortune will come to you through bereavement.

If you hear the wind soughing, denotes that you will wander in estrangement from one whose life is empty without you.

To walk briskly against a brisk wind foretells that you will courageously resist temptation and pursue fortune with a determination not easily put aside. For the wind to blow you along against your wishes, portends failure in business undertakings and disappointments in love. If the wind blows you in the direction you wish to go you will find unexpected and helpful allies, or that you have natural advantages over a rival or competitor.

To dream of a ladder being raised for you to ascend to some height, your energetic and nervy qualifications will raise you into prominence in business affairs.

To ascend a ladder means prosperity and unstinted happiness.

To fall from one denotes despondency and unsuccessful transactions to the tradesman, and blasted crops to the farmer.

To see a broken ladder betokens failure in every instance.

To descend a ladder is disappointment in business, and unrequited desires.

To escape from captivity, or confinement, by means of a ladder, you will be successful, though many perilous paths may intervene.

To grow dizzy as you ascend a ladder denotes that you will not wear new honors serenely. You are likely to become haughty and domineering in your newly acquired position.

To dream of visiting your old home, you will have good news to rejoice over.

To see your old home in a dilapidated state warns you of the sickness or death of a relative. For a young woman this is a dream of sorrow. She will lose a dear friend.

To go home and find everything cheery and comfortable, denotes harmony in the present home life and satisfactory results in business. 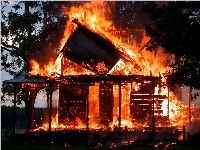 Fire is favorable to the dreamer if he does not get burned. It brings continued prosperity to seamen and voyagers, as well as to those on land.

To dream of seeing your home burning, denotes a loving companion, obedient children, and careful servants.

For a businessman to dream that his store is burning, and he is looking on, foretells a great rush in business and profitable results.

To dream that he is fighting a fire and does not get burned denotes that he will be much worked and worried as to the conduct of his business.

To see the ruins of his store after a fire forebodes ill luck. He will be almost ready to give up the effort of amassing a handsome fortune and a brilliant business record as useless, but some unforeseen good fortune will bear him up again.

If you dream of kindling a fire, you may expect many pleasant surprises. You will have distant friends to visit.

To see a large conflagration denotes to sailors a profitable and safe voyage. To men of literary affairs, advancement, and honors; to business people, unlimited success.

To dream that you sustain a fall, and are much frightened, denotes that you will undergo some great struggle, but will eventually rise to honor and wealth; but if you are injured in the fall, you will encounter hardships and loss of friends.

To dream of drowning, denotes loss of property and life; but if you are rescued, you will rise from your present position to one of wealth and honor.

To see others drowning, and you go to their relief, signifies that you will aid your friend to high places, and will bring deserved happiness to yourself.

For a young woman to see her sweetheart drowned, she denotes her bereavement by death.

To dream that you are naked foretells scandal and unwise engagements.

To see others naked foretells that you will be tempted by designing persons to leave the path of duty. Sickness will be no small factor against your success.

To dream that you suddenly discover your nudity, and are trying to conceal it, denotes that you have sought illicit pleasure contrary to your noblest instincts and are desirous of abandoning those desires.

For a young woman to dream that she admires her nudity, foretells that she will win, but not hold honest men’s regard. She will win fortune by her charms. If she thinks herself ill-formed, her reputation will be sullied by scandal. If she dreams of swimming in clear water naked, she will enjoy illicit loves, but nature will revenge herself by sickness, or loss of charms. If she sees naked men swimming in clear water, she will have many admirers. If the water is muddy, a jealous admirer will cause ill-natured gossip about her.

To dream of being in any disaster from public conveyance, you are in danger of losing property or of being maimed from some malarious disease.

For a young woman to dream of a disaster in which she is a participant, foretells that she will mourn the loss of her lover by death or desertion.

To dream of a disaster at sea, denotes unhappiness to sailors and loss of their gains. To others, it signifies loss by death; but if you dream that you are rescued, you will be placed in trying situations, but will come out unscathed.

To dream of a railway wreck in which you are not a participant, you will eventually be interested in some accident because of some relative or friend being hurt, or you will have trouble of a business character.

To dream of setting a trap, denotes that you will use intrigue to carry out your designs

If you are caught in a trap, you will be outwitted by your opponents.

If you catch game in a trap, you will flourish in whatever vocation you may choose.

To see an empty trap, there will be misfortune in the immediate future.

An old or broken trap denotes failure in business, and sickness in your family may follow.

To dream of the ghost of either one of your parents, denotes that you are exposed to danger, and you should be careful in forming partnerships with strangers.

To see the ghost of a dead friend foretells that you will make a long journey with an unpleasant companion, and suffer disappointments.

For a ghost to speak to you, you will be decoyed into the hands of enemies. For a woman, this is a prognostication of widowhood and deception.

To see an angel or a ghost appear in the sky denotes the loss of kindred and misfortunes.

To see a female ghost on your right in the sky and a male on your left, both of pleasing countenance, signifies a quick rise from obscurity to fame, but the honor and position will be filled only for a short space, as death will be a visitor and will bear you off.

To see a female ghost in long, clinging robes floating calmly through the sky, indicates that you will make progression in scientific studies and acquire wealth almost miraculously, but there will be an under note of sadness in your life.

To dream that you see the ghost of a living relative or friend denotes that you are in danger of some friend’s malice, and you are warned to carefully keep your affairs under personal supervision. If the ghost appears to be haggard, it may be the intimation of the early death of that friend.

Submit Your Story!  If you have haunting stories that you would like to share, you send us an e-mail.