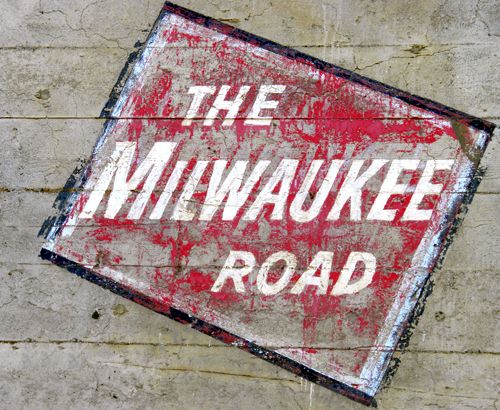 There are several ghost towns in Bowman County, North Dakota including Gascoyne, Griffin, and Haley. Like beads on a string, towns were spaced across the county with the advent of the Milwaukee Railroad in 1907 and 1908. There are more small towns along the railroad’s path that are not ghost towns, but, have diminished in size over the years, leaving in their wake a number of ghostly-looking buildings in the very small towns of Scranton and Rhame.

The battle over control of the Northern Pacific Railway and the Chicago, Burlington & Quincy Railroad in 1901 made the Chicago, Milwaukee, St. Paul and Pacific Railroad, more familiarly called the Milwaukee Road, aware that without its own route to the Pacific it would be at its competitors’ mercy. In 1901 the president of the Milwaukee Road dispatched an engineer to the west to estimate the cost of duplicating Northern Pacific’s line. His figure was $45 million ($1,241,820,000 today). Such an expenditure required considerable thought and it was not until November 1905 that Milwaukee’s board of directors authorized construction of a line west to Tacoma and Seattle, Washington.

Gascoyne was originally established as a Milwaukee Road Railroad townsite in 1907. It was first called Fischbein, after Henry G. Fishbein, one of the first residents of the community and the first postmaster; but, the name was changed to Gascoyne on March 25, 1908. 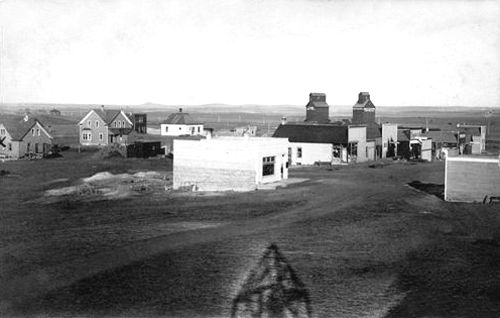 The new name came from a construction foreman on the Milwaukee Road transcontinental rail line that was built through the city, though an alternative explanation suggests that the name refers to the large deposits of natural gas found in the area.

Never a very large town, Gascoyne’s population peaked in 1930 at 97 people, after which, it started a slow decline to its present-day population of just 16 people. However, throughout the years, the small town boasted a hardware store, a bowling alley, a grocery store, a Standard Oil station, taverns, and a town hall which is best remembered for the many dances that were held there.

Children attended school in the prominent building that still stands but is deteriorating quickly. The impressive school was built in the 1910s and housed three large classrooms and had a basement large enough for early competitive basketball contests. Later, these competitions were moved to Woodman Hall, which is no longer standing. 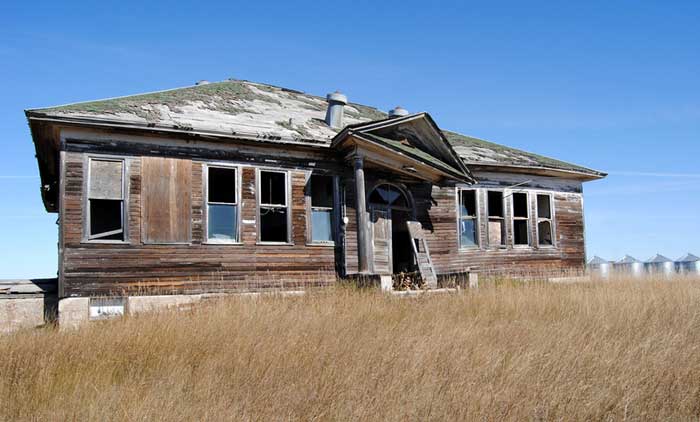 The old Gascoyne School has since been torn down. This is a shot of what still stood in 2010.

After some years, the Gascoyne school merged with that of nearby Scranton, located some four miles to the northwest. For a few years, elementary school kids from grades 1-4, from both Scranton and Gascoyne, attended school in Scranton, while grades 5-8, from both towns, attended in Gascoyne. All high school students went to Scranton. However, that soon ended and the Gascoyne school closed, with all students attending in Scranton. The front entry, facing south, included some stately Neo-Classical details.

At some point, lignite coal was found in the area, and Gascoyne was the site of a coal mine for much of the 20th century. The most active period for the mine occurred between 1975 and 1995 when about 2.5 million tons of lignite were produced per year, primarily for the Big Stone Power Plant near Big Stone City, South Dakota. The mine started slowing down in 1995 and was shut down completely in 1997. Interestingly, there is no evidence to mining activities today. 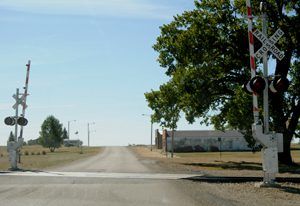 Gascoyne lost its post office in 1971 with the retirement of postmaster Gladys Erickson, who was not replaced. The Erickson Grocery, run by Gladys and Francis Erickson, housed the post office and was the last retail business in Gascoyne to close, in 1972. Currently owned by the city of Gascoyne, the store stands on the west side of Main in the middle of what was the business district. The false-front of the building is brick, with drainage tile used for trim, and the other three walls are stucco over tile.

Today, there are no remaining open businesses still in operation, no church, and no school, but many of its old commercial buildings still stand in good shape. However, there are about 16 remaining residents. The old town is located on Highway 12 in Southwestern North Dakota about 17 miles southeast of Bowman. 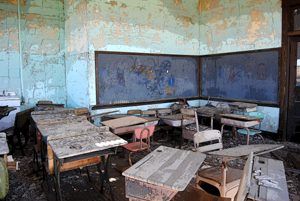 Interior of the Gascoyne, North Dakota School. The school was torn down in 2016 due to stability concerns.