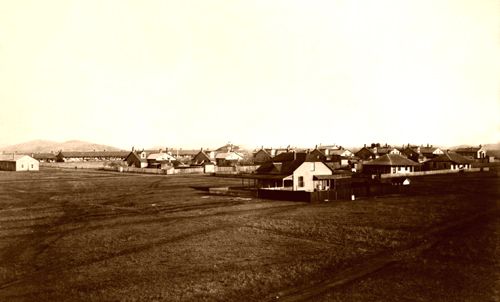 In June 1892, a payroll stagecoach was making its way from Wichita Falls, Texas, to Fort Sill, Oklahoma, carrying nearly $100,000 in gold and silver coins to pay the soldiers and employees of the post. Two heavily armed guards accompanied the stagecoach driver.

The driver and guards had made this three-day journey seven times previously without any problems. Initially, the stagecoach was accompanied by a military escort of six to 12 armed troops, but after months of making the trip safely, the large guard had been withdrawn. That decision was a mistake.

Early in the morning, as the stagecoach was nearing the crossing of the Red River, three masked outlaws appeared from behind a thick strand of trees, shot the two lead horses pulling the stagecoach, and wounded one of the guards. As the outlaws ordered the men down from the stage, one of the guards fired on the robbers, killing two and wounding the third. The surviving bandit returned fire, killing the guard, and forced the driver and another guard to lie facedown on the ground.

Though bleeding from a wound in the shoulder and chest, he transferred six heavy saddlebags of coins onto the backs of his dead companions’ horses. He then ordered the wounded guard and driver to start walking back to Wichita Falls. The outlaw then rode off to the north leading the two horses laden with the saddlebags, hoping to make it to Oklahoma City. 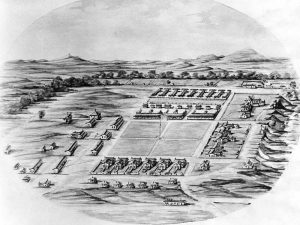 But the bandit was losing blood and knew he needed help. He then boldly headed to Fort Sill, where he could find a doctor. He arrived just after sunset the following day and stopped to water his horses at a well at the side of the trading post. He then buried the saddlebags about ten paces from the well and made his way to the fort. Telling the soldiers that his name was Allen and he had been wounded in a hunting accident, he was taken to see the post doctor. The physician treated him, gave him a pain injection, and suggested he get some sleep.

However, by the next day, his horse had been identified as belonging to one of the outlaws, and Allen was arrested, tried, found guilty, and sentenced to prison at Huntsville, Texas, where he remained for the next 33 years.

When he was finally released from prison in 1925, he took a job on a farm near Levelland, a small town in the Texas Panhandle. He returned to Fort Sill and tried to recover the buried loot at the first opportunity. But the post had changed in the three decades since he had buried it. Four to six feet of fill dirt had been added to the yard, and the old outlaw could not remember which direction from the well he paced off the ten steps. A military guard considered him a vagrant within a short time and escorted him away from the fort. Allen then returned to Texas, planning to return to Oklahoma soon. However, his health was failing, and he told a friend, G.W. Cottrell, about the buried payroll and drew him a map. A few months later, Allen passed away.

Several years later, the 72-year-old Cottrell traveled to Fort Sill, where he told his story and filled out several pages of forms requesting permission to dig for treasure on military property. Weeks later, his request was granted, and on January 27, 1937, Cotrell returned to Fort Sill, where he found that the old trading post had been torn down. However, he continued to search and found the filled-in well in the corner of a maintenance building. Having no idea of the direction and distance from the well, Cottrell could only guess its location and was not able to find the buried treasure. He then returned to Texas, but returned in 1940 with help but was unsuccessful again. 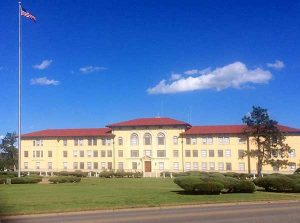 Then, on April 1, 1964, the army announced it had sufficient evidence of the payroll’s existence to search for themselves. Using heavy machinery, 15 holes were dug 10 feet deep just south of the maintenance building, but nothing was found. Though many felt the search did not cover a large enough area, the army abandoned the cause. Afterward, numerous requests were made to search, but Fort Sill officials denied all.

Fort Sill is still an active army base today.