Fort Lapwai was a federal fort established in north-central Idaho in 1862 in what is now the present-day city of Lapwai.

The Lapwai Valley had long been connected to the Nez Perce people, who had utilized the area for as long as can be remembered. The name Lapwai comes from the Nez Perce word “Thlap-Thlap,” which refers to a butterfly and the sound that its wings make. The area became a part of the Oregon Territory in 1848 and a part of the Nez Perce Indian Reservation in 1855.

In 1860, Elias D. Pierce found gold on a tributary of the Clearwater River near the present town of Orofino. News of this discovery spread through the Pacific Northwest like wildfire, and by the spring of 1861, thousands of men descended on the Nez Perce reservation, trespassing on tribal lands.

Unable to stem the tide, civilian authorities called on the military to establish a fort on the reservation to protect the Nez Perce from the invading miners. In the fall of 1862, two companies of volunteers under Major Jacob S. Rinearson arrived on a site two miles above Lapwai Creek to establish an army post that was first called Camp Lapwai. It was renamed Fort Lapwai in 1863, in what would become bounds of the Idaho Territory when it was created in March. The same year, new negotiations began between the government and the Nez Perce to create a new treaty that would shrink the size of the reservation, placing the gold fields outside of the reservation boundaries.

Many chiefs refused to agree to these terms during these negotiations and angrily departed. Amid uncertainty, pressure, and promises, the remaining chiefs reluctantly agreed to a reservation 90 percent smaller than the 1855 treaty. Without authority, they ceded lands of the Nez Perce, who left the council, in a document after that called “the Thief Treaty.” Congress ratified the 1863 Treaty in 1867.

In the meantime, the fort was briefly unoccupied in 1866 at the end of the Civil War when the Volunteer regiments were disbanded and before sufficient Federal troops were available to garrison it. It was reoccupied again between July and November 1867. Most of the buildings at the fort were built during its early years, which included barracks for enlisted personnel, officers’ quarters, stables, warehouses, offices, and corrals.

In the years following the 1863 treaty, many of the Nez Perce who had not agreed to it continued to live in the Wallowas and other locations within their traditional homelands. But conflict with newcomers increased, particularly in the Wallowa region, the home of Chief Joseph and his band. After settlers petitioned the government to relocate the Nez Perce to the reduced 1863 Treaty reservation in Idaho, the U.S. Army was commanded to do so in 1877, which led to the Nez Perce War. In June 1877, Fort Lapwai was the center of operations as many Nez Perce fled the area, hoping to seek safety with their Crow allies on the plains to the east. Their flight across four states in the next few months resulted in several battles and skirmishes. Afterward, the fort’s stockade held prisoners captured during the war and other Nez Perce returning to the reservation after hostilities ended. 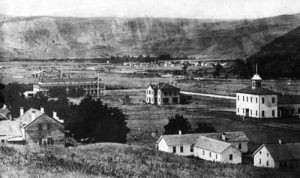 On June 5, 1884, the fort was decommissioned and turned over to the Indian Service. It then became a government Indian boarding school. The Northern Idaho Indian Agency moved to the site in 1904 from Spalding. Three years later, a tuberculosis sanatorium and preventorium were established at the fort site, and the boarding school closed in 1912. In 1945, the tuberculous sanatorium was closed, and soon a fire gutted the original wing of the school and destroyed all the records.

Today, just a few old fort structures remain but are not open to the public. The National Park Service protects an officer’s duplex built in 1883. It is located on the Nez Perce Indian Reservation in the village of Lapwai, which is the seat of government for the Nez Perce Indian Nation and home to the Bureau of Indian Affairs Northern Idaho Indian Agency. 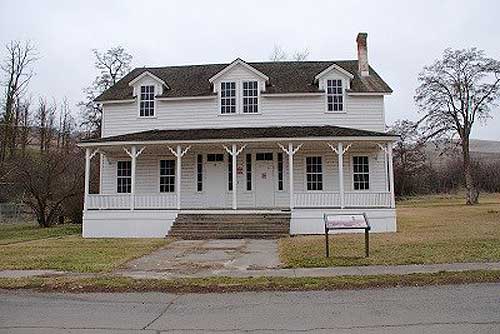 A remaining building at Fort Lapwai, Idaho today by the National Park Service.