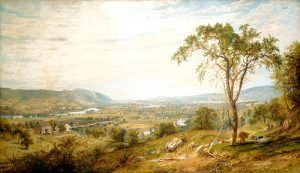 Fort Durkee was built in 1769 on the eastern bank of the Susquehanna River in what is present-day Wilkes-Barre, Pennsylvania.

It was established in spring and summer of 1769 by area settlers, led Major John Durkee, a Connecticut militia officer, to protect the area from Indian attacks and from the intrusion of Pennsylvania settlers, who challenged their title to the Wyoming Valley.

Many people from Connecticut had settled along the east branch of the Susquehanna River since the 1750s and had early on, encountered fierce resistance from Shawnee and Delaware Indians who lived there and from the Iroquois Indians to the north. Many of them moved into the Wyoming Valley because of land shortages, due to the thinness of the Connecticut soil and its short growing season, and overcrowding.

Claims on the Wyoming Valley were disputed from the start. The Dutch regarded the Susquehanna River as the border between New Netherland and the English colony of Virginia. However, King Charles II of England rejected all Dutch claims on North America and he granted the land to Connecticut in 1662, two years before his country’s conquest of New Netherland. In 1681, Charles II also included the same land in the grant to William Penn.

Both colonies purchased the same land by treaties with the Indians. The people from Connecticut were called “Yankees” by their Pennsylvania neighbors, who resented the encroachment of other colonists onto the lands that they had cleared, settled, and farmed.

In 1769, the same year that Fort Durkee was built, Connecticut settlers founded the town of Wilkes-Barre in 1769. The fort was built of hewn logs a strong blockhouse surrounded by a rampart and intrenchment. The size of the enclosure is not known, but it was probably of one-half an acre in extent. Later that year, in November, local settlers and agents of Pennsylvania’s proprietary government, called “Pennamites,” captured the fort and burned the town of Wilkes-Barre. They then took a number of the Connecticut claimants to Philadelphia to stand trial. This was the beginning of what became known as the  “Yankee-Pennamite Wars.” Over the next several years, Fort Durkee changed hands several times. The Connecticut settlers were challenged in January 1771 when Pennsylvania authorities built Fort Wyoming just 1,000 feet away from Fort Durkee. 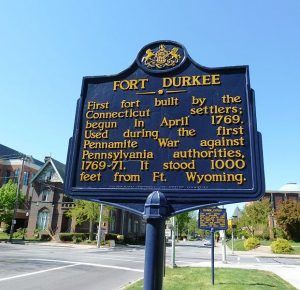 During the American Revolution, General John Sullivan briefly occupied the abandoned site of Fort Durkee in his expedition against the British and their Iroquois Indian allies in June 1779.

At the conclusion of the American Revolution, Congress was asked to decide on the legal owner of the region. In December 1782, by the Decree of Trenton, the land was granted to Pennsylvania. The Commonwealth of  Pennsylvania then ruled that the Connecticut Yankees were not citizens of the Commonwealth, could not vote, and were to give up their property claims.

There are no remains of the fort today, but it is commemorated by a historical marker on River Street, near South Street in Wilkes-Barre, Pennsylvania.