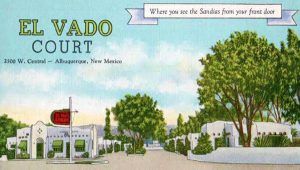 The motor court actually predates Route 66’s Central alignment by more than a year. The motel was built by a man named Daniel Murphy, an Irishman who had worked in New York City before making his way to New Mexico. Murphy was working as a manager of the Franciscan Hotel in downtown Albuquerque when word came that Route 66 was to be realigned through Albuquerque. Murphy then left his post at the Franciscan Hotel to open the El Vado in 1937. He chose the motel’s name Vado, which means ‘ford’ in Spanish, for its location near the old ford that crossed the Rio Grande where Bridge Street is today. 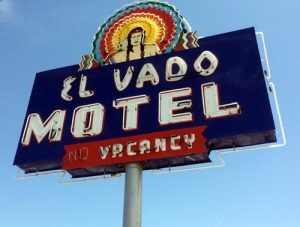 The motel consisted of 32 units, some of which were interspersed with covered carports, arranged in two parallel, one-story buildings facing a parking courtyard. When the motel opened, gas pumps were located along Central Avenue in front of the motel office. A flashy neon sign topped by an American Indian wearing a colorful headdress welcomed travelers on Route 66.

Murphy constructed the motel in the Spanish Pueblo Revival style. Purposely-designed irregularities give the motel the look of the nearby Pueblos. These include curvilinear and straight parapets, irregular massing, varying buttresses, and exposed wooden roof beams. The interior of the motel office and lobby were ornately decorated in the Pueblo style. When the motel opened in 1937, the local business journal Albuquerque Progress described the units as “swanky tile cabin suites ready for the summer tourist trade.”

For years, the El Vado retained a high degree of historic integrity because it was largely unaltered since its original construction. Route 66 historian David Kammer described the motel as “one of the best examples of a largely unaltered pre-World War II tourist courts remaining along Route 66 in New Mexico.” Alterations over the years included the removal of the gas pumps in front of the motel office, the addition of a swimming pool, the replacement of original windows with metal double-hung windows, and the painting of Southwest Indian designs on the façade. The El Vado’s relatively unaltered appearance coupled with its spatial arrangement, remaining carports, and use of Spanish Pueblo Revival style conveyed a strong sense of the property’s era. The El Vado is historically significant for its association with automobile tourism along Route 66; its role as an auto court in defining Albuquerque’s growth, appearance, and image; and its picturesque architectural style designed to attract tourism and immerse travelers in the exoticism and mystique of the Southwest. It was listed in the National Register of Historic Places in 1993. 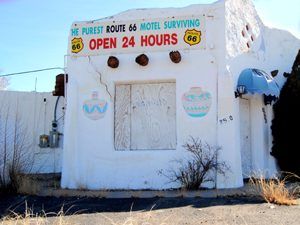 Over the years, the motel changed hands a couple of times and in 2005, with business dropping, the property was sold again, this time to a local developer who planned to tear the motel down and build luxury townhouses. However, Route 66 enthusiasts and historic preservationists lobbied to save the old auto court. The City of Albuquerque then stepped in and saved the El Vado. Plans were then made to refurbish the site in a mixed-use development that includes a community food court, an amphitheater, a boutique motel, and a small events center.

For years, the old El Vado Motel sat behind a chain-link fence, with peeling paint, and a weed-choked courtyard.

However, after a 13-year hiatus, the historic El Vado Motel is open once again to the traveling public. The 22-room motel features mid-century hand-made furnishings and one-of-a-kind local artwork. Part of an $18 million redevelopment, the motel is part of a complex that also includes an events center, shops, restaurants, and a pub featuring local beers. 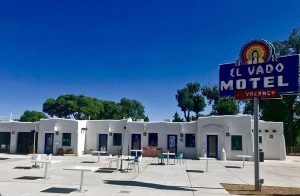