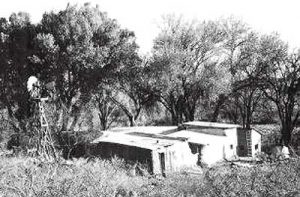 El Fortin De La Cienega, Texas was built along Cienega Creek in 1857 century by Milton Faver and modeled after his headquarters ranch complex at nearby El Fortin del Cibolo.

The heavily fortified structure was the first major outpost built between Fort Davis and the Rio Grande. It was the second property developed by Milton Faver as he expanded the vast ranching empire he began in Presidio County in the 1850s. Faver chose a defensive site surrounded by hills and the creek to build a fortified adobe structure to serve as the Cienega ranch headquarters. The natural springs on the property were tapped to provide the needed water resources for stock raising, immense vegetable gardens, and a peach orchard.   He also built an irrigation system that supplied water for his Cibolo ranch crops supplied soldiers at Fort Davis and citizens of the nearby mining town of Shaffer. Several buildings were located at the site that included dwellings, workrooms, stone corrals, fences, and holding pens.

The primary activity at El Fortin de la Cienega was cattle ranching, and Milton Faver employed several families as vaqueros (cowboys) and laborers. Following Faver’s death in 1889 his property was divided between his wife Francesca and his son Juan Faver, who received title to La Cienega. After Juan’s death in 1913, his heirs sold the Cienega complex to neighboring ranchers John A. Pool, Sr. and J. W. Pool. It remained the property of the Pools and their heirs, the Greenwood family, until the 1980s.

Today, El Fortin del Cibolo is a rare surviving example of a private fort in the Big Bend region. Reconstructed and restored based on archeological evidence and using hand labor, the one-story adobe, cottonwood, and cypress structure features a courtyard configuration with walls one to four feet thick; rounded towers at the northwest and southeast corners; gun ports; and wood drain spouts. Hand-built stone fences accentuate the fort’s primitive surroundings. It is one of the region’s most significant historic structures. Recorded as a Texas Historic Landmark, it is today part of Cibolo Creek Ranch, one of the oldest ranches in Texas. The Ranch now provides visitor accommodations, dining, event venues, hunting, guided tours, and other activities.

A historic marker is located in Presidio County near Shafter, Texas.