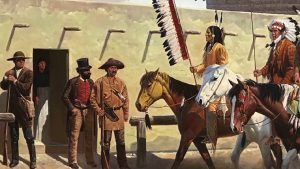 Arriving at the Council House in San Antonio, Texas

On March 19, 1840, a group of some 33 Penateka Comanche leaders, along with 32 Comanche men, women, and children, arrived in San Antonio, Texas, to conduct peace talks at the Council House. Since the first white settlers had come to Texas, there had been a history of conflict between the Penateka and the pioneers, but driven by the fear of Cheyenne and Arapaho attacks along the northern frontier of Comanche territory, the losses suffered in several smallpox epidemics, and the successes of Texas Rangers against them, the Comanche sought to make peace with the Texans.

However, their objective would not be met. Prior to the meeting, Texas had demanded that the Comanche return all captives, but when they arrived, they brought only a few prisoners, including one 13-year-old girl named Matilda Lockhart who had been severely abused.

While peace talks were taking place in the Council House, Matilda was being cared for and relayed her story of torture during her capture and revealed that the Comanche still held 13 other captives that they planned to use for future negotiations or to barter for supplies. Texas soldiers then entered the Council House and informed the Comanche leaders that they were to be held as hostages until the remaining captives were released. When the Indians tried to escape and called to their fellow tribesmen outside the house for assistance, all hell broke loose. 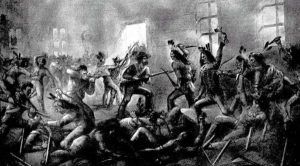 The soldiers killed most of the Comanche who remained in the Council House courtyard. In the melee, 30 Penateka Comanche were killed, including five women and children. Six whites were killed and 20 wounded. The rest of the Comanche were held pending the release of the remaining white captives. Outraged at having their “ambassadors,” who they felt should be immune from acts of war, held hostage, the Penateka leaders refused to respond to the demands of the Texas authorities.

The council was sacred not only to the Comanche People but to all Native Americans, and the Penateka retaliated with a vengeance. Of the 16 hostages they held, 13 were tortured to death as soon as the news of the Council House Fight reached the Comanche villages. The captives, including Matilda Lockhart’s six-year-old sister, suffered slow-roasting among other tortures. Only three captives who had been adopted into the tribe were spared. Chief Buffalo Hump then launched the Great Raid of 1840, leading hundreds of warriors on raids against Texas villages. During the raid, at least 25 settlers were killed, and others were taken prisoner, including a Mrs. Crosby, a granddaughter of Daniel Boone, who was later murdered by her captors. The Texian militia responded, leading to the Battle of Plum Creek in August 1840, and ultimately stopped the raids.

Matilda Lockhart never recovered from her experience as a captive and died several years later.