Camp Crittenden, Arizona, was a U.S. Army post established on August 10, 1867, at the head of Davidson Canyon, three miles west of present-day Sonoita.

First called Camp Crittenden, the fort was named for Colonel Thomas L. Crittenden, who commanded the 32nd Infantry at the battles of Shiloh, Stone River, and Chickamauga during the Civil War. Built adjacent to the site of Fort Buchanan, its purpose was to protect settlers in the Babocomar, Sonoita, and Santa Cruz Valleys from the Apache Indians. The fort saw much action during the Apache Wars, especially between 1870 and 1871. Lieutenant H.B. Cushing was killed in a skirmish with Cochise’s band of Apache when he led a detachment of troops on May 5, 1871.

The camp was closed on June 1, 1873. Very little remains of this post, mostly crumbling adobe and mounds of earth that were once barracks walls. It is located on private land in Santa Cruz County, Arizona. 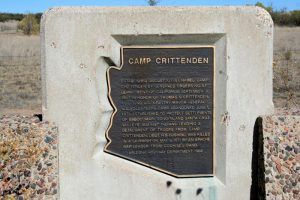