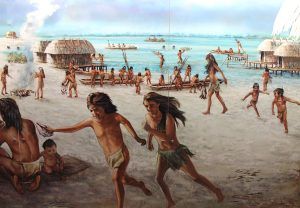 The Calusa people were an important tribe of Florida. They formerly held the southwest coast from about Tampa Bay to Cape Sable and Cape Florida, together with all the outlying keys, and extending inland to Lake Okeechobee. They also claimed authority over the tribes of the east coast, north to about Cape Canaveral. They were farmers to a limited extent but were better noted as expert fishers, daring seamen, and fierce and determined fighters, keeping up their resistance to the Spanish arms and missionary advances after all the rest of Florida had submitted.

They practiced human sacrifice of captives, scalped and dismembered their slain enemies, and were repeatedly accused of being cannibals. They first encountered Europeans in 1513 when, with a fleet of 80 canoes, they boldly attacked Ponce de León, who was about to land on their coast, and after an all-day fight compelled their enemy to withdraw. Even at this early date, they were already noted among the tribes for the golden wealth which they had accumulated from the numerous Spanish wrecks cast away upon the Keys in the passage from the south. Two centuries later, they were regarded as veritable pirates, plundering and killing without mercy the crews of all vessels, excepting the Spanish, so unfortunate as to be stranded in their neighborhood.

In 1567 the Spaniards established a mission and fortified post among them, but both seem to have been discontinued soon after, although the tribe came later under Spanish influence. About this time, they numbered nearly 50 villages, from one of which the city of Tampa takes its name. By the year 1600, they were carrying on regular trade with Havana, Cuba.

By the constant invasions of the Creek and other Indian allies of the English, they were driven from the mainland and forced to take refuge on the Florida Keys. More were evacuated to Cuba, where many of them died. When Spain ceded Florida to Great Britain in 1763, the last remnants of the tribes of South Florida went to Cuba. Those few that remained on the mainland were absorbed into the Seminole tribe; however, their language and culture survived up to the Second Seminole War’s close.