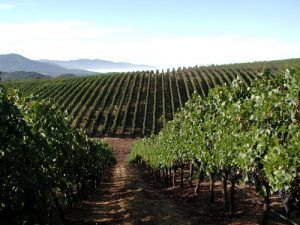 It is impossible to study the history of wine country in the Sierra Foothills and the Delta of California without knowledge of the broader economic forces that have shaped the region since the mid-nineteenth century.

The early economy revolved around the transport of goods to and from these regional centers. However, the population was relatively small and did not support a significant wine industry.

On January 24, 1848, James Marshall discovered gold in the American River. When news got out, a flood of young men raced to the region to seek their fortunes. 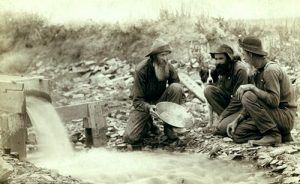 For a few years, miners searched streams throughout the Sierra Foothills for surface placer. It was during these early years of the Gold Rush that the romanticized notion of the self-sufficient miner emerged. The mythological independent miner is a part of California’s identity to this day.

These miners had an incessant thirst for alcohol. This demand led to the birth of the Sierra Foothills Wine Country. In 1856, Swiss immigrant Adam Uhlinger planted grapes in the Shenandoah Valley. These were the original vineyards in the Sierra Foothills and were located in Amador County.

The wine industry boomed in the following years to satisfy the need for alcohol amongst the miners. Despite the inhospitable soils, rugged entrepreneurs continued to seek out new locations to grow grapes and make wine.

Early vineyards were also planted to the north of Uhlinger’s original vines in the more elevated El Dorado County. In 1860, Fossati-Lombardo was the first winery established in the newly incorporated town of El Dorado.

At the height of the Gold Rush, there were over 100 wineries in the Sierra Foothills. All evidence points to Zinfandel as the primary varietal at the time. Wines were extremely rustic, naturally very alcoholic and often fortified. 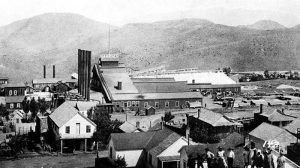 After the surface placer was discovered and mined, large-scale operations took over. The idea of independent miners striking their fortunes is largely a misnomer. It was true for the first few years, but as with any major business opportunity in a free market society, capital was rapidly pooled to profit from it. The Pacific Stock Exchange was the epicenter of concentrating the capital needed to undertake these massive operations.

Entire rivers were diverted with wooden flumes in an effort to scour the dry riverbeds for gold. The scale of these operations was monumental.

The mining industry also began to delve deep into the earth through the practice of hydraulicking. Using Hydraulics was the process of literally blasting away mountainsides with pressurized water. This tactic had immediate as well as long-lasting implications for the region’s wine country, environment, and economy. 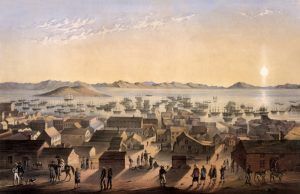 To this day, there are man-made canyons that are hundreds of feet deep in the Sierra Foothills from this process. Debris washed downstream to the Delta and caused massive flooding and devastation at the time. They also formed a base of silt which is partly responsible for the current region’s remarkable productivity. However, the immediate economic benefits were felt in the emerging metropolis of San Francisco.

The industrial and real estate fortunes of San Francisco were tied not only to the actual gold of the Sierra Foothills, but also the frenzy created by gold fever. A handful of wealthy San Franciscans owned factories located south of Market Street that produced the machinery needed for hydraulicking. They also owned much of the real estate north of Market Street. They completed their highly profitable cycle by using newspapers and magazines to advertise the potential for vast riches to anyone who moved to the area.

Large numbers of people moved to San Francisco and the surrounding areas to claim their piece of the windfall. The population increase sky-rocketed their land values and provided an abundant and cheap labor force to extract more gold. The burgeoning San Francisco skyline was a direct result of the inverted skyscrapers that were the mines in the Sierra Foothills.

The gold from these mines literally financed this urban prosperity. It was unbelievably lucrative for a select few. The immediate collateral effects of the whole process were the devastated farmlands (including wine country) in the Delta. Flooding was so common that the region became a shallow extension of the San Francisco Bay for much of the year. Ships could barely navigate the mud-choked waters of the once pristine Bay.

Environmental Implications and the End of Hydraulicking 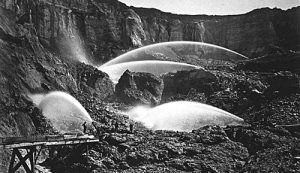 Forests were cut down with alarming efficiency to build flumes to divert rivers. Because almost all the trees surrounding the rivers and creeks in the Sierra Foothills were cut down, the banks were not properly supported. This contributed to the regular inundations downstream. In one exceptionally bad year, the newly elected mayor of Sacramento had to travel by boat to his inauguration.

The majority of the trees in the Tahoe area today are less than 150 years old. The old-growth was decimated during the Gold Rush.

Huge amounts of debris from constant the use of hydraulics filled riverbeds and caused flooding in Delta farmlands that worsened every year. Viticultural production in Lodi was adversely affected during these years.

This boom cycle continued until January 7, 1884, when Judge Lorenzo Sawyer of the Ninth Circuit Court outlawed the practice of hydraulicking. He declared that the impact of using hydraulics on the natural environment was undeniable. Political pressure from agricultural interests in the Delta and the Central Valley was also a factor. However, the most powerful objection to hydraulicking came from the U.S. Navy. They could barely reach Mare Island Naval Base through the clogged waterways.

The Bust, Prohibition, and Post-Prohibition Years

One of the defining periods in California’s history had ended and the economic repercussions were massive. The town of Fiddletown is an example of the impact of the mining bust. Once a vibrant trading center, the population dwindled significantly after Judge Sawyer’s ruling.

Because wine country in the Sierra Foothills was isolated from the rest of the state, planted vineyards in the region largely avoided the devastation caused by the Phylloxera Louse at the end of the nineteenth century. Because of this, there are some exceptionally old vines still alive in the foothills today.

However, this isolation coupled with the disintegration of the local market for wine (no more miners) had a severe impact on the wine industry. When Prohibition became law, only the Fossati-Lombardo Winery retained its bond to produce wine for local churches. The wine industry in the Sierra Foothills fell even further into oblivion in the decades immediately following the repeal of Prohibition. Even Fossati-Lombardo Winery was forced to shut its doors.

The Delta weathered these years more successfully. In the years after the Gold Rush, many of the growers in Lodi began to form wine-producing co-ops to deal with the changing times. These arrangements were largely successful for several decades.

After Prohibition was enacted, Lodi Wine Country continued to produce grapes for home winemakers through the Volstead Act. Heads of household were legally allowed to make a limited amount of wine for personal consumption. The proximity of logistical routes to Lodi made the business quite profitable.

The Flame Tokay and Zinfandel varietals were shipped all over the country, often east of the Rocky Mountains. Cesare Mondavi (father of Robert and Peter) came to Lodi from Northern Italy in the 1920s. He began his career in the wine industry by shipping grapes to the East Coast during Prohibition.

The Renaissance Wine Country in the Delta and Sierra Foothills 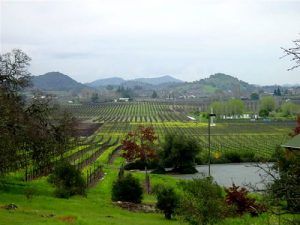 By the 1950s, 7 major Lodi co-ops encompassed more than 600 independent growers. However, problems with this business model began to arise. All the co-ops except East-Side were eventually bought by major wine production and distribution corporations. This is the basis for the current domination of big business in Lodi Wine Country. The region has only partly emerged from the jug wine era. Lodi is instrumental in producing grapes for White Zinfandel. That being said, there are many high-quality, limited-quanity wines from the AVA.

Wine production in Clarksburg began in 1968 when Warren and Chris Bogle planted 20 acres of vineyards in the region. The AVA’s wine industry has grown considerably since then and currently has a reputation for producing some of the best Chenin Blanc in the United States.

Greg Boeger bought the old Fossati-Lombardo Winery in 1973 and established the first Post-Prohibition Winery in the Sierra Foothills. Since then, the region has steadily grown, and has recently planted a significant amount of Rhone and Cal-Italian varietals. Zinfandel remains the region’s specialty.

The Sierra Foothills and Delta have played an extremely important role in shaping modern California. Although these regions are often thought of as peripheral, they are largely responsible for the population and financial foundation that the Golden State rests on today. 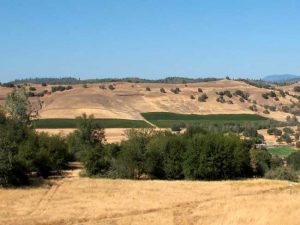