Located near the north end of Surprise Valley in what is now Modoc County, California, Fort Bidwell was built in 1863. Strategically located in the northwestern corner of the state, its purpose was to protect the travel routes from Oregon and Idaho, including the Applegate and Lassen Trails.

Originally called Camp Bidwell, it was named for Mexican War veteran, Major John Bidwell of the California Volunteers. The initial camp was short-lived, abandoned in early 1865, but due to numerous Indian raids, was quickly reestablished near its original location in July 1865. The new post, built of logs, housed two companies of soldiers.

Just a few months later, the soldiers joined with local citizens to fight Indians in Guano Valley, Nevada. They attacked the Indian camp, killing 81 braves and 15 women and children. 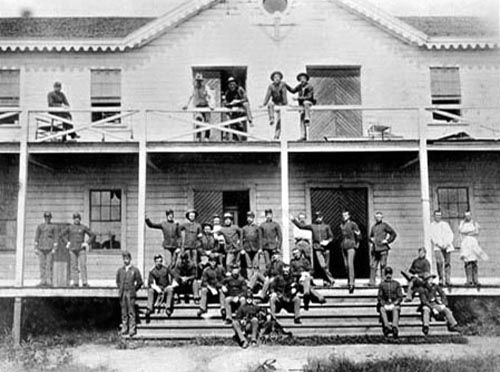 In 1870, the fort relocated again, expanding just to the south. The new location included a parade ground and numerous buildings, including officers row, barracks, a school, a theatre, workshops, cavalry stables, a powder magazine, and a hospital. By this time a small settlement comprised mostly of ranchers and Paiute Indians had also been established.

In 1867, troops from the fort fought in the Battle of Infernal Caverns in 1867 with General George Crook against the Paiute, Pit River and Modoc Indians.

The presence of more and more white settlers on Modoc Indian lands began to incite a number of skirmishes with the Modoc Indians and in 1872, the Modoc War erupted when U.S. Army troops, including soldiers from Fort Bidwell, rode to the main Modoc camp to forcibly remove its inhabitants. The soldiers were also involved in the Nez Perce campaign of 1877 and the Bannock campaign the following year. 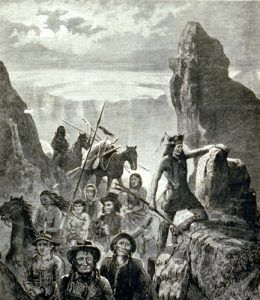 On April 5, 1879, the post’s name was officially changed to Fort Bidwell. For the next several years, the post settled into noncombatant activities. The garrison continued to be occupied with soldiers until October 21, 1893, but the military reservation was transferred to the Department of Interior on November 22, 1890, when it became the Fort Bidwell Indian Reservation, which included a government Indian school. When the soldiers were sent to other places in 1893, the former military barracks were utilized as student dormitories for the Indian School.

In 1930, the boarding school was discontinued and the old military barracks were torn down. However, the officer’s quarters still stand. Nearby, is the old post’s cemetery. The fort is located in the town of Fort Bidwell, California.