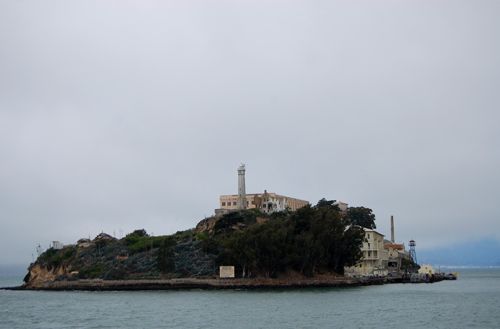 With its centuries-old history from ancient Native Americans, to Fort Alcatraz, to a Military Barracks, and most often known service as one of the toughest federal penitentiaries in the Nation, it is no wonder that this place is said to be one of the most haunted in the nation.

Often described as a portal to another dimension, Alcatraz is filled with the energy of those who came to the “Rock” and seemingly never left.

From its first visitors, tales and legends of the island have circulated for several centuries. In the beginning, the Native Americans believed the island to be inhabited by evil spirits.

As severe punishment for violations of tribal law, Indians were sometimes isolated for a period of time on the island or even banished for life to live among the evil spirits.

Today, these spirits that continue to lurk in the shadows of the often fog-enshrouded island have been heard, seen and felt by both the staff and many visitors to Alcatraz. The sounds of men’s voices, screams, whistles, clanging metal doors, and terrifying screams are said to be heard within these historic walls, especially near the dungeon.

While the island served as a federal penitentiary, a number of guards reported extraordinary experiences including hearing the sounds of sobbing and moaning, terrible smells, and reports of what they called “The Thing,” an entity that was said to appear with glowing eyes. Other reports were made of phantom prisoners and soldiers appearing before the guards and families who lived on the island. 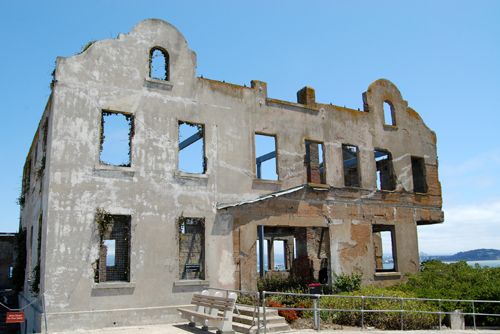 The old warden’s home on Alcatraz Island, by Kathy Weiser-Alexander.

Reportedly, even Warden Johnston, who did not believe in ghosts, once encountered the unmistakable sounds of a woman sobbing while leading a number of guests on a tour of the prison. The cries, heard by not only the warden but also the guests, were described as coming from inside the walls of the dungeon. Just as the sobbing stopped, an icy cold wind blew through the group.

Since the 1940s, apparitions have been seen at the site of the now burned-out shell of the warden’s house. During a Christmas Party at Warden Johnston’s, several guards told the story of a ghostly man who suddenly appeared before them wearing a gray suit, brimmed cap, and sporting mutton-chop sideburns. As the startled guards stared at the apparition, the room suddenly turned very cold and the fire in the Ben Franklin stove was extinguished. Less than a minute later, the spirit vanished.

Often it has been reported that on foggy nights, the old lighthouse will suddenly appear, accompanied by an eerie whistling sound and a flashing green light which makes its way slowly around the island. Appearing to both guards and visitors alike, the spectacle vanishes just as suddenly as it appears. 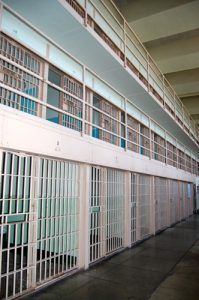 When the prison was still open, other guards told of hearing phantom cannon and gunshots, accompanied by screams that were so real they sent the seasoned guards to the ground, believing that prisoners had somehow escaped and obtained weapons. After taking cover, the guards would then cautiously look about to see absolutely nothing. These incidents could never be explained.

Another often reported experience of the guards was the smell of smoke that often came from a deserted laundry room as if something was on fire. When they went to investigate the black smoke was so thick it drove the guards from the room. However, just minutes later, the room was completely smoke-free.

The notorious D-Block of the prison is said to have been and continues to be, the most haunted block in all the prison. While first built the same as the other cell blocks, the Bureau of Prisons appropriated additional money for a more secure D-Block after the 1939 escape attempt, in which Arthur “Doc” Barker was killed.

D-Block, which became known as the “Treatment Unit” comprised of 42 cells with varying degrees of restrictions. For all prisoners incarcerated in D-Block, there was absolutely no contact with the general population. Thirty-six of the cells were virtually like the others in the general population; however, inmates were not allowed to work, nor go to the mess hall for meals. They were allowed only one visit to the recreation yard and two showers each week, and all meals were served in the cells. Their only diversion was reading of prison approved material. These cells all faced the Golden Gate Bridge, from which fierce cold winds often blew. One guard who worked D-Block was known to turn on the air conditioning to make it even colder for those confined on the block. 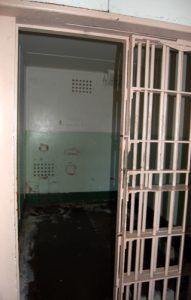 A cell in the “Hole,” by Kathy Weiser-Alexander.

Five of the remaining six cells in D-Block were known as Strip Cells, but were more often referred to as the “Hole.” Reserved for the most serious offenders of prison rules, these cells were located on the bottom tier, the coldest place in the prison, and contained only a sink, a toilet and a low wattage light bulb that could be turned off by the guards. The prisoner’s mattresses were taken away during the day and they were not allowed at any time in the yard or showers or given reading materials. Inmates could be sentenced to as many as 19 days in the hole, completely isolated and in a state of constant boredom.

The last Strip Cell, known as the “Oriental,” was the most severe punishment the prison could assign. Assuring complete deprivation of all peripheral senses, the dark steel-encased cell contained no sink or toilet, just a small hole in the floor for prisoner waste.

Inmates were placed naked in the cell, given a restricted diet, and confined in a totally pitch-black, cold environment. Although a sleeping mattress was allowed at night, it was removed at dawn each morning. Inmates were usually only subject to this degree of punishment for only 1-2 days.

A former guard who worked at the prison in the 1940s reported that guards often saw the ghostly presence of a man dressed in late 1800s prison attire walking the hallway next to the Strip Cells. On one occasion, when an inmate was locked in “the Hole,’ he immediately began to scream that someone with glowing eyes was in there with him. The 19th-century spectral prisoner had become so much of a practical joke among the guards, that the convict’s cries of being “attacked” were ignored. The inmate’s screams continued well into the night when they were suddenly replaced by total silence. The following morning, when the guards inspected the cell, the convict was found dead with a terrible expression on his face and noticeable hand-prints around his throat. The autopsy revealed that the strangulation was not self-inflicted.